The Twitter users, however, were not impressed by the Mathura MP's efforts and criticised her for not doing the task well. 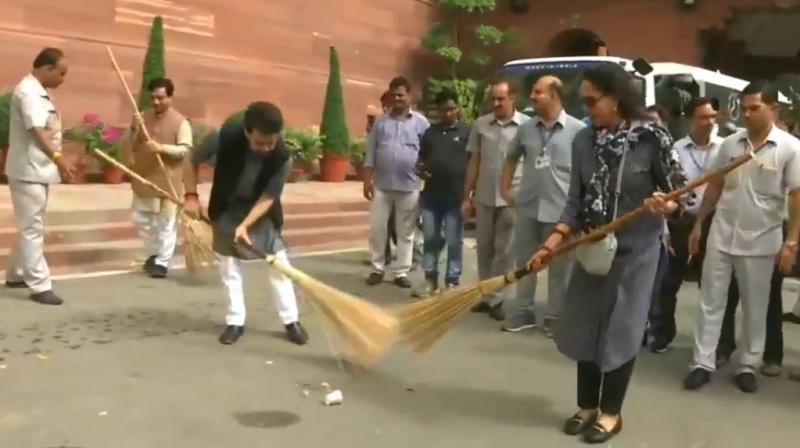 Union Minister of State for Finance Anurag Thakur also joined her in this endeavor. A video tweeted by the news agency ANI shows both the leaders cleaning the premises with a broom in their hands.

The Twitter users, however, were not impressed by the Mathura MP's efforts and criticised her for not doing the task well.

The reactions were hilarious and the witty twitteraties were not parsimonious in taking jibes at the veteran actress.

A Twitter user compared her efforts with that of Pakistani wicket-keeper Fakhar Zaman praising the cricketer for trying.

Another user @GabbarSingh took a jibe at the actress' endorsing a water purifier brand and now cleaning the air.

Hema Malini is a legend, after purifying water all these years, now she is cleaning air. pic.twitter.com/dSzSS1iFaw

Another user compared her sweeping the road with her sweeping victory in the recently concluded Lok Sabha elections.

Hema Malini had a sweeping victory this election.

Here are some more funny reactions:

Entire #SwachhBharat initiative so far is a bit like Hema Malini's sweeping. https://t.co/vTw24z2Uts

😂 poor thing doesn’t even know how to use one. Look at her. She’s clueless!

An initiative of Prime Minister Narendra Modi, the campaign was launched in 2014 after Modi-led National Democratic Alliance won the election.