It indicates an attempt by Pakistan's Inter-Services Intelligence (ISI) to malign India's image. 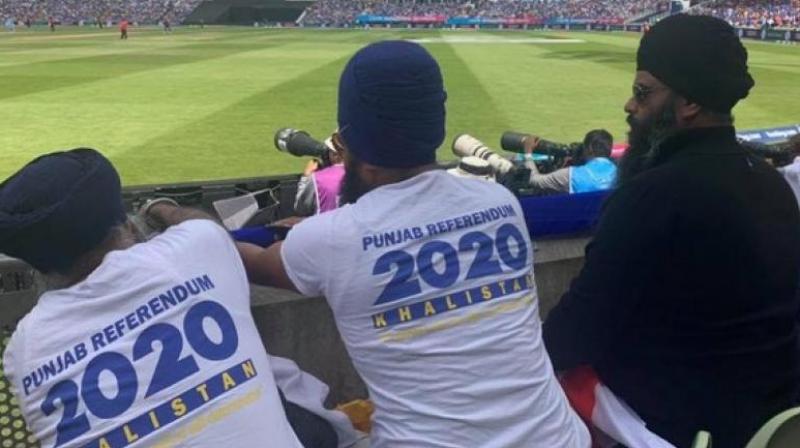 Several videos of a few Sikhs, along with Pakistani fans, raising the flags of Pakistan and Khalistan during the match have gone viral on social media. They can also be heard chanting slogans like 'Khalistan Zindabad' and 'Pakistan Zindabad' in the videos. (Photo: ANI)

Leeds: Sikhs living in Leeds have categorically denounced the pro-Khalistan slogans raised during the Pakistan vs Afghanistan cricket World Cup match held on June 29 in the United Kingdom.

Several videos of a few Sikhs, along with Pakistani fans, raising the flags of Pakistan and Khalistan during the match have gone viral on social media. They can also be heard chanting slogans like 'Khalistan Zindabad' and 'Pakistan Zindabad' in the videos.

It clearly indicates an attempt by Pakistan's Inter-Services Intelligence (ISI) to malign India's image and use sports as a platform for its political gains.

Slamming this act, cricket enthusiasts during the India vs Sri Lanka match here on Saturday said that any message with political undertones must not be given entry to the sports arena as it spoils the atmosphere.

A Sikh cricket enthusiast said, "Politics and sports are two different fields and we should never try and mix the two as it is a very toxic combination."

"Let the sports stay where it is and politics should be done outside. So, sports separate, politics separate. Just keep them that way. The arena of sports is not a platform for politics and it shouldn't be used as a platform. Leave it alone, it is a pure sport. So we can't adulterate it. So leave it pure," he added.

When asked if Pakistan should indulge in it, he added, "No, they should not be doing it. There are other platforms for politics. Don't use politics for political gains. That's the main thing."

The Pakistani spectators, who deliberately made such attempts, have not only drawn criticism from the crowd but the ICC too.

Fans believe that politics of this nature -- which Pakistan believes in -- damages the spirit of the games and induces animosity and fights.

Another Sikh cricket enthusiast in Leeds said, "This is wrong. It's a game and its aim is to entertain people. Support your team whether it is India or England. But it is unacceptable that people are bringing flags of Pakistan and Khalistan. One should watch the game and go home."

Pakistan is always looking for an opportunity where it can malign India. However, to its disappointment, it always gets exposed, another enthusiast added.

Even though Pakistan has for years fueled and funded the dead secessionist movement, it has gained nothing out of it.

It tried influencing the people of Punjab and shifted its target to overseas Sikhs after its diabolic designs didn't resonate with the educated and progressive youth of Punjab.