Supreme Court says no action on resignations till July 16. 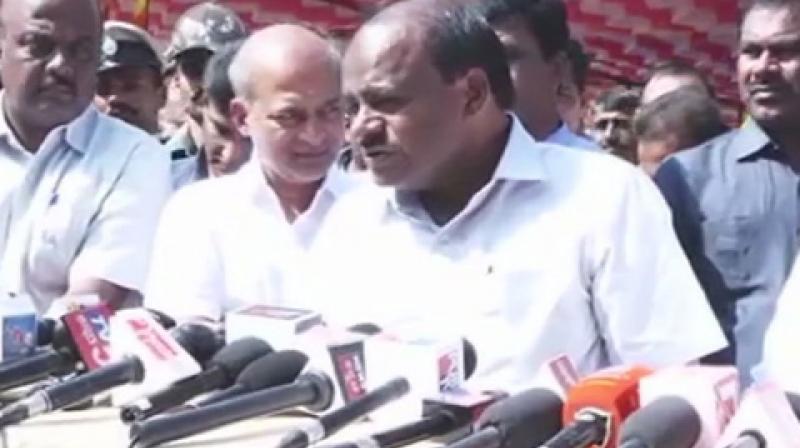 Bengaluru/New Delhi: In a shock move aimed at laying the blame for the destabilisation of his government at the door of the BJP while garnering a sympathy vote for his Janata Dal(S), chief minister H.D. Kumaraswamy on Friday called for a trust vote in the Assembly next Wednesday.

The move comes against the backdrop of the JD(S)-Congress coalition being unable to get 16 MLAs and two Independent legislators to withdraw their resignations, and the Supreme Court once again stepping in on Friday to stymie the Speaker’s move to stall resignations by the rebels.

The beleaguered chief minister’s move came on the first day of the monsoon session of legislature, on a day when the Supreme Court directed Speaker K. Ramesh Kumar not to act either on the resignation letters of rebel MLAs or petition seeking their disqualification.

“The occasion is such that, I have to say this — I can continue only if I enjoy the trust of the House. I am ready for everything. I am not here to stick on to power. I have decided that I should move the confidence motion. I seek your time,” Mr Kumaraswamy told the Speaker even before the House could commence its proceedings with condolences to minister C.S. Shivalli and Jnanpeeth laureate Dr Girish Karnad.

While the Opposition BJP poured scorn on Mr Kumaraswamy for broaching the issue of a confidence motion without paying homage to his Cabinet colleague and Dr Karnad, CLP leader Siddaramaiah asserted confidently that the coalition government would win the floor test.

Though the spate of resignations has cast doubt over the government’s longevity with as many as 16 ruling coalition MLAs resigning and two Independents withdrawing support, Mr Siddaramiah lashed out at that the BJP, saying it was scared of the floor test because of the “black sheep” in their party.

Mr Siddaramaiah told the media: “This is exactly why we are moving a vote of confidence motion. The BJP is afraid because they know there are black sheep in their party,” he claimed and added, “I do not want to disclose details but I am confident that we will win the trust vote.”

Soon after Mr Kumaraswamy made public his intent to seek a trust vote to prove that he still commands a majority in the Assembly, all three parties — Congress, Janata Dal(S) and the BJP — worked overtime to safeguard their MLAs from attempts to lure them with lucrative posts by moving them to secure locations in the outskirts of the city.

In the event of Mr Ramesh Kumar accepting the resignations, the coalition’s previous strength of 118 would dwindle to 100 with the majority mark dropping from 113 to 105. The BJP has 105 members and the support of the two Independents, taking its tally to 107.

On Friday, the lawmakers had waited for the apex court’s order on a petition filed by 10 rebel MLAs. When it finally came, the court, listing “weighty issues that have arisen”, said it would consider the matter on July 16 and ordered that the status quo as of Friday should be maintained.

The top court said an incidental question that arises in the matter is the kind and extent of directions that should be issued by a constitutional court to another constitutional functionary, which in the present case happens to be the Speaker of the Assembly.

The bench, headed by Chief Justice Ranjan Gogoi, said it also needs to address as to whether the Speaker is obligated to decide on disqualification proceedings before accepting the resignations of MLAs. “That apart, on the pleadings and arguments made, the question as to whether in a situation where resignations by MLAs as well as disqualification proceedings are pending against the same MLAs, the Speaker is obligated under the Constitution to decide the disqualification issue in the first instance,” the bench added.

Meanwhile, in an attempt to prevent its strength in the Assembly from dwindling any further ahead of the trust vote on Wednesday, the Congress on Friday huddled its MLAs to a five-star hotel on Friday. Not to be left behind, the Opposition BJP too moved its MLAs to a resort to prevent possible poaching by the ruling Congress and JD(S).

There were reports that attempts are being made to dig out various scams in which some of the rebel Congress and JD(S) MLAs are allegedly involved so that pressure can be exerted on them to fall in line and back the coalition government when the confidence motion is put to vote. Ironically, the Congress and JD(S) have been accusing the BJP of using the income tax and Enforcement Directorate to threaten many of their MLAs to cross over. Now, the Kumaraswamy government has reportedly adopted the same strategy to save the government.

Sources in the government said that Mr Kumaraswamy, soon after posting Hemanth Nimbalkar as the anti-corruption bureau chief, called him and city police commissioner, Alok Kumar, for a discussion. The CM reportedly asked them to dig out anything that could prove to be embarrassing to the MLAs. Based on these files, the MLAs would be reportedly told that if they failed to support the coalition during the trust vote, they would be “fixed” and would find it difficult to regain their stature in politics in future.

In a related development, Gokak Congress MLA and the architect of dissidence in the Congress camp, Ramesh Jarkiholi, is learnt to have asserted that none of the MLAs will participate in the ongoing monsoon session of the Legislature since they don’t want the coalition government to continue. This statement has put a big question mark over the survival of the Congress-JD(S) government as it cannot survive if the 16 MLAs remain absent from the trust vote.

Speaker Ramesh Kumar issued notices to Ramesh Jarkiholi and another Congress MLA, Mahesh Kumatalli, in connection with a disqualification petition filed by Mr Siddaramaiah on Thursday. This pertains to their absence from a Congress Legislature Party meeting convened four months back.