The closure, however, poses a challenge to the administration in managing pilgrims during the upcoming Kanwar Yatra. 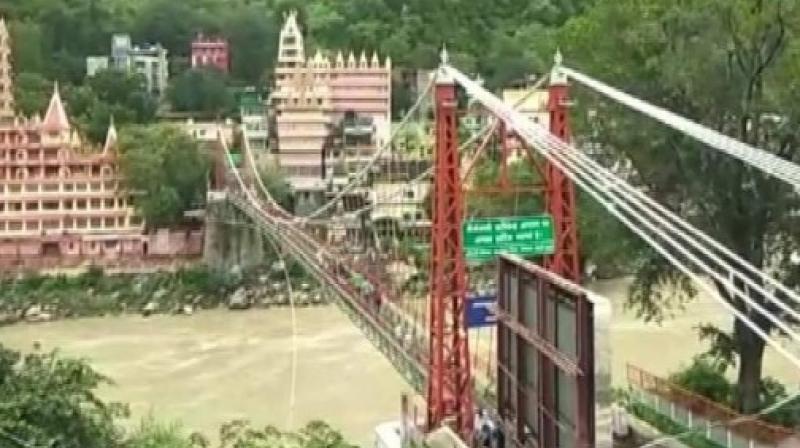 The bridge has been used to shoot documentaries and Bollywood songs drawing many foreign visitors too. (Photo: ANI)

Garhwal: The Uttarakhand government has ordered the immediate closure of the Lakshman Jhula in Rishikesh following Public Works Department’s report stating that the bridge is in a distressed state which may cause an accident.

The iconic suspension bridge was built by the PWD in 1923 which maintains it till now. The closure, however, poses a challenge to the administration in managing pilgrims during the upcoming Kanwar Yatra which begins on July 17.

The bridge aided the residents of Pauri Garhwal and Tehri Garhwal to cross the Ganges. People will have to walk another two kilometres to Ram Jhula to cross the river.

“The bridge was built 96 years ago because people wanted to commute between two districts and visit the religious places located there,” The Indian Express quoted a PWD official who added that it was the only hanging suspension bridge in the state at that time.

He further said, “It is widely believed that Laxman, the younger brother of Lord Rama, had crossed river Ganga from the same route where the bridge now stands majestically.”

The Jhula is a renowned tourist interaction. Numerous temples, markets, ashrams and hotels have come up in the vicinity of the Jhula. The bridge has been used to shoot documentaries and Bollywood songs drawing many foreign visitors too.

The news has left many local residents and tourists disappointed as it is among the most visited destinations.