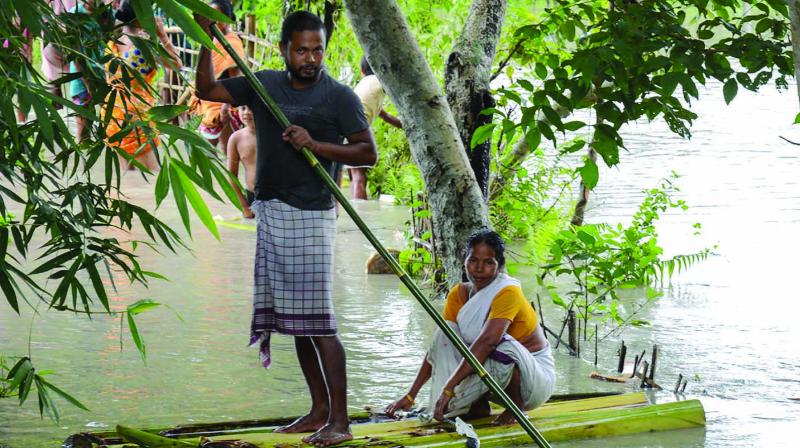 Villagers move to a safer place from a flooded area on a makeshift raft in Nalbari district of Assam on Friday. (Photo: PTI)

Guwahati: The heavy rains in northeastern states and neighboring countries on Friday deteriorated the flood situation in Assam with more than eight lakh people affected in 17 districts besides disrupting the rail communication in Lumding — Badarpur hill section under Lumding division of Northeast Frontier Railways.

The Assam State Disaster Management Authority (ASDMA), claimed that at least three people were killed in rain and flood-related incidents in Golaghat, Dhemaji and Kamrup Metropolitan district in past two days.

“So far, a total of 8,69,024 number of population have been affected in the recent wave of Flood in 21 districts,” the ASDMA aid in its bulletin on Friday.

The Brahmaputra river is flowing above danger level in Jorhat, Sonitpur, Kamrup, Goalpara and Dhubri districts, Burhidehing in Dibrugarh, Desang in Sibsagar, Dhansiri in Golaghat, Jia Bharali in Sonitpur, Kopili in Nagaon, Puthimari in Kamrup,  Beki River in Barpeta, Katakhal in Hailakandi and Kushiyara in Karimganj  districts.

Assam chief minister Sarbananda Sonowal also held a video conference with deputy commissioners of affected districts and senior officials of different government departments to review the flood situation and directed them to remain fully alert and be prepared to tackle the situation promptly and effectively. He directed the deputy commissioners to set up round-the-clock control rooms to ensure that people in distress get an immediate response in an emergency situation during floods, officials said.

The chief minister also reviewed the status of relief camps, distribution of relief material to marooned people and measures adopted for safety and security of animals in the flood-affected districts, an official spokesperson said.

The chief public relation officer of Northeast Frontier Railway Pranav Jyoti Sharma in statement said that due to heavy rain, railway track has been affected between Jatinga Lumpur – New Harangajao station in Lumding – Badarpur hill section under Lumding division. The settlementoccurred at about 09-30 am on Friday making it unsuitable for trainmovement. The repairing work has already started and it will take morethan 8 hours to complete the restoration work. The railway authoritieshave either terminated or cancelled most of the trains on the route.

The railway authority has also made provision for adequate drinking water for all passengers of short-terminated trains at respectivestations.