Mevani, who is the convener of Rashtriya Dalit Adhikar Manch, had invited Kumar to take part in the Freedom March in Mehsana on Wednesday. 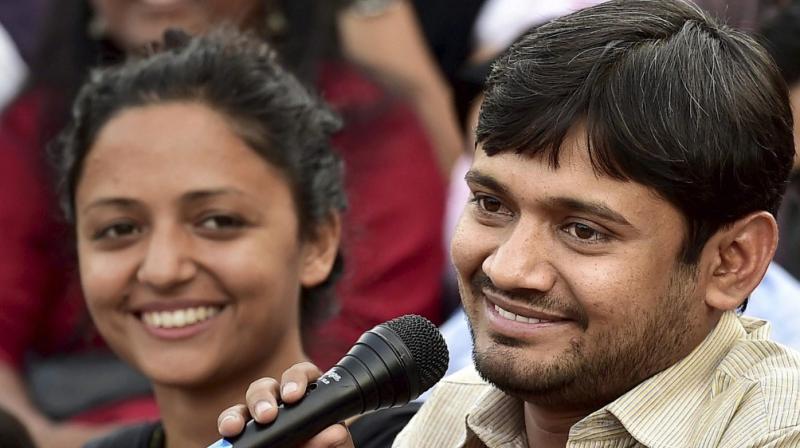 While addressing people at Somnath chowk before the march, Kumar, who is facing sedition charges, attacked the BJP governments at the Centre and in Gujarat, claiming that atrocities on Dalits and Muslims have increased under them. (Photo: PTI)

Mehsana (Gujarat): Police on Thursday detained Dalit agitation spearhead Jignesh Mevani, student leader Kanhaiya Kumar and 15 others and registered a case against them for taking out 'Freedom March' on the first anniversary of Una flogging incident without permission.

Mevani, who is the convener of Rashtriya Dalit Adhikar Manch, had invited Kumar to take part in the Azadi Kooch (Freedom March) in Mehsana on Wednesday.

Considerable number of Dalit activists first gathered at Somnath Chowk in Mehsana before embarking on the march towards Banaskantha district on Wednesday afternoon, the police said.

The Mehsana district authorities had cancelled the permission granted earlier to Mevani for taking out the march.

"We have detained 17 persons from Fatehpura circle. Later, an FIR was registered under IPC section 143 against them for being a part of an illegal assembly.

"We did not arrest them. They were allowed to go afterwards," an official of the Mehsana 'A' division police station, where the FIR has been lodged, said.

As per the schedule, 'Freedom March' will end at Dhanera town of Banaskantha district of north Gujarat after one week.

The key agenda of this march is to mount pressure on the Gujarat government to allocate agricultural land to Dalits, so that they can start a new life with dignity, Mevani had announced in June.

After being released, co-convener of the manch, Kaushik Parmar, who is also named in the FIR, announced that the march will continue as they have the permission to enter Unjha, their next destination.

"We have been released by police after the FIR was registered against us. We have decided to continue our march. We are planning to reach Unjha by Wednesday night," Parmar told PTI.

While addressing people at Somnath chowk before the march, Kumar, who is facing sedition charges, attacked the BJP governments at the Centre and in Gujarat, claiming that atrocities on Dalits and Muslims have increased under them.

He also alleged that people who dare to speak truth are booked under sedition charges to silence them.

In Una, Dalit youths were paraded and flogged for allegedly skinning a dead cow, an incident that caused nation-wide outrage after its video went viral.