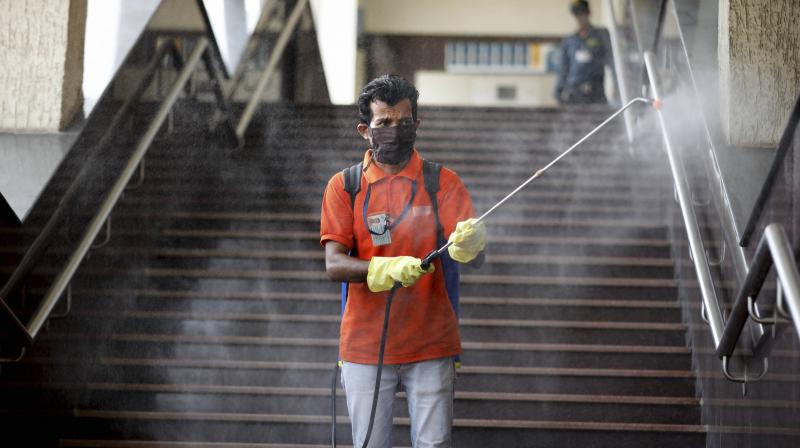 New Delhi: Amid a massive spurt in coronavirus cases in India, experts on Saturday came down hard on the ICMR for its sero-survey findings to assert that there was no community transmission of COVID-19, saying it was not reflective of the current situation and the government was showing "obstinacy" in accepting the truth.

Emphasising that community transmission was on in many parts of the country, the experts asked the government to admit it so that people don't get complacent.

The assertion by experts from the field of virology, public health and medicine came after Indian Council of Medical Research (ICMR) Director General Balram Bhargava at a media briefing on Thursday said that India is definitely not in the community transmission stage of COVID-19 spread while releasing the findings of the survey.

India's first sero-survey to monitor the trend of coronavirus infection transmission found that 0.73 per cent of the 26,400 people surveyed from about 65 districts were exposed to coronavirus.

AIIMS former director Dr MC Mishra said there is no doubt that there has been community transmission in several parts of the country.

"With the mass exodus and the country unlocking, it has become more rapid and the disease has reached areas where there were no cases. It is high time the government comes to fore and acknowledges it so that people become more alert and do not become complacent," Mishra told PTI.

Talking about the ICMR sero-survey, he said the sample size of around 26,400 people is quite inadequate to capture the scale of the spread of the infection, especially keeping in mind the large population and the diversity of the country.
Leading virologist Shahid Jameel said India reached the community transmission stage a long time ago.

"It's just that the health authorities are not admitting it. Even ICMR's own study of SARI (severe acute respiratory illness) showed that about 40 per cent of those who tested positive for SARS-CoV-2 did not have any history of overseas travel or contact to a known case. If this is not community transmission, what is," said Jameel.

CEO of Wellcome Trust/Department of Biotechnology's India Alliance and best known for his extensive research in Hepatitis E virus and HIV, Jameel said an important point to consider is the sensitivity and specificity of the test that ICMR has not revealed, and even a one percent change would make a big difference in the results in areas of low prevalence.

Noted lung surgeon Dr Arvind Kumar said that even if the ICMR argument is accepted, it cannot be denied that community transmission is happening in places like Delhi, Ahmedabad and Mumbai.

"India is a vast country and every state is experiencing the virus differently and peaking at different times," said Kumar, who works at the Sir Ganga Ram Hospital here.

"The antibodies take two weeks to develop so the survey is reflective of April. In April, we were in the best possible state. Based on a study representing the April situation, saying that we are not in community transmission is a wrong statement," he told PTI.

Chairman of one of the empowered groups set up to deal with the pandemic and NITI Aayog member Dr VK Paul had said the results of the survey indicate the situation of the country around April 30 as the study was conducted mostly around third week of May and antibodies against an infection take around 15 days to develop.

While the sero-survey to estimate the fraction of population infected with SARS-CoV-2 in the general population has been completed, the survey in containment zones of hotspot cities is ongoing.

India's COVID-19 tally breached the three-lakh mark on Saturday with a record single-day spike of 11,458 infections, while the death toll rose to 8,884 with 386 new fatalities, the Union Health Ministry said. With a COVID-19 caseload of 3,08,993, India is now the fourth worst-hit nation by the pandemic.

The ICMR is doing a study of containment areas and that study will throw up much higher numbers that are likely to fall in the criteria of community transmission, Paul added.

On sero-survey, he said it has been done in places where there were not many cases and it should have been carried out in Dharawi or Delhi. If these surveys are not done in proper places then there is no point in doing it, he said.

"It (survey) is definitely not reflective of the current situation. In the end of April we were in a reasonably good position anyways," he said.

Dr Vikas Bajpai, assistant professor, Centre for Social Medicine and Community health at the Jawaharlal Nehru University, said if the government has decided that "obstinacy and blindness to truth" is going to be a matter of policy for it in fighting against this COVID-19 pandemic then it is pointless to try and make them see reason.

"Community transmission is a stage when you are not able to track down the source of infection of a positive case despite thorough contact tracing. Then it is presumed that the virus is in general being transmitted in the community," he said.

Hitting out at ICMR, he said it has mentioned that the study does not include data from the containment zones and the spread of the virus was not uniform everywhere. So if you exclude the most active areas of transmission which are the containment ones obviously the prevalence rate you will arrive at will not reflect the reality, Bajpai added.

Dr Manoj Goel, Director and Head, Pulmonology, Critical Care and Sleep Medicine, Fortis Memorial Research Institute, Gurugram, said it would not be right to believe that there is community transmission at the national-level, but it is definitely happening in certain cities like Delhi, Mumbai and Ahmedabad.

The ICMR sero-survey found that lockdown and containment measures were successful in preventing rapid spread of the disease, but a large proportion of the population still remains susceptible. Bhargava had said the study surveyed a total of 83 districts with 26,400 people enrolling for it and 28,595 households were visited.

The surveyed districts were categorised into -- zero cases, low incidence, medium incidence and high incidence -- and were selected based on incidence of reported COVID-19 cases as on April 25. The findings shared with the media stated that data from 65 districts has been compiled till now.