Doctors have been agitating since Tuesday after two junior doctors were attacked and seriously injured at NRS Medical College and Hospital. 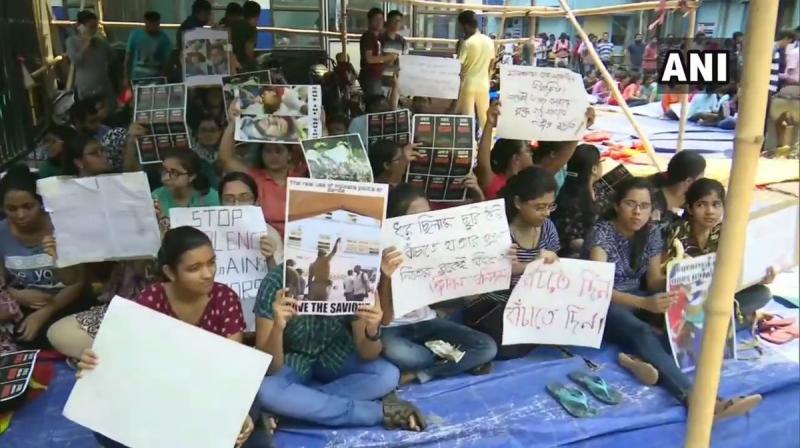 ‘We will continue with our agitation till our demands are fulfilled. We have spoken to the Governor. He listened to us and hopefully will speak to the chief minister,’ one of the junior doctors said. (Photo: ANI)

Kolkata: Striking junior doctors in West Bengal on Thursday defied Chief Minister Mamata Banerjee's 2 pm-deadline to join work and said the agitation will continue till their demands related to their security in government hospitals are met.

The doctors have been agitating since Tuesday after two of their colleagues were attacked and seriously injured at the NRS Medical College and Hospital in Kolkata.

Banerjee, who visited the state-run SSKM hospital around noon in the wake of disruption of medical services in several parts of the state over the past three days, warned the doctors of action if they do not resume work. A team of doctors met Governor Keshari Nath Tripathi at Raj Bhavan over the issue and said the chief minister's reaction to their protest was unexpected. "We will continue with our agitation till our demands are fulfilled. We have spoken to the Governor. He listened to us and hopefully will speak to the chief minister," one of the junior doctors told reporters outside the Raj Bhavan after meeting Tripathi.

The delegation reiterated the demands of the striking doctors. "We will continue with our agitation till our demands are fulfilled. Our demands are simple... proper security with armed policemen at all hospitals, arrest of culprits involved in the NRS attack on Saturday under non-bailable sections, we did not expect the chief minister to say what she did. Listening to her, we felt like that we were the culprits," another junior doctor said.

The team met the Governor after Banerjee, who also holds the health and family welfare portfolio, came down heavily on the doctors for striking work. "I condemn the agitation. The junior doctors' strike is a conspiracy by the CPI(M) and the BJP," she said.