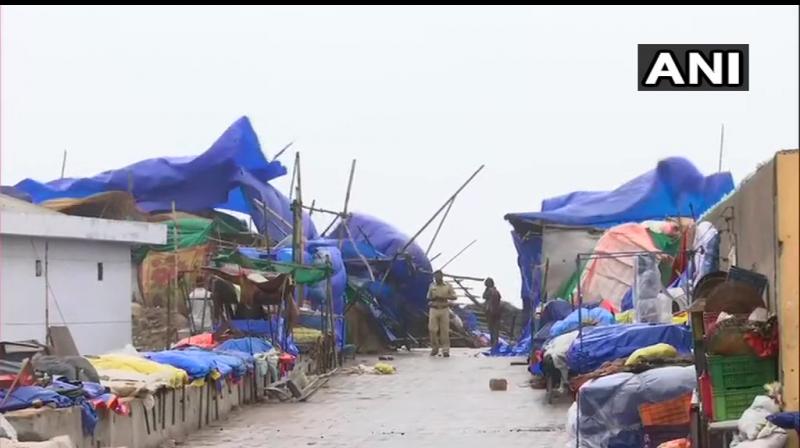 Vayu is expected to cross Gujarat coast between Dwarka and Veraval as a 'very severe cyclonic storm' with a wind speed of 155-165 km per hour gusting to 180 km per hour. (Photo: Twitter/ ANI)

Gujarat: Vayu is expected to cross Gujarat coast between Dwarka and Veraval as a "very severe cyclonic storm" with a wind speed of 155-165 km per hour gusting to 180 km per hour on Thursday afternoon.

Taking to ANI in New Delhi, MeT Department Director RK Jenamani said that Vayu is expected to reach the coastal area of Porbandar and Kutch with a speed of 135-165 on Thursday morning. "This is similar to the cyclone Fani in Odisha and it is hard to predict its longevity."

He said that its effects will be seen on Thursday and Friday and heavy rain is expected in the affected areas of the state.

"Various safety and security precautions are also being taken by Western Railway for train passengers of these cyclone prone areas under the jurisdiction of Western Railways i.e. Veraval, Okha, Porbandar, Bhavnagar, Bhuj and Gandhidham, etc," a press statement by the Western Railway said.

Flights will be suspended at five Gujarat airports – Porbandar, Diu, Bhavnagar, Keshod and Kandla--for 24 hours from midnight Wednesday due to Cyclone Vayu. "Equipment and heavy machinery have been moved to safety at respective airports and the Airport Directors of AAI's Bhuj and Jamnagar airports have been asked to write to the Indian Air Force to suspend operations of civil flights from these two airports also," said the Airports Authority of India.

Gujarat government on Wednesday evacuated over 2.7 lakh people from 10 coastal districts as "very severe cyclonic storm" Vayu inched closer to the state coast and is expected to make landfall between Dwarka and Veraval on Thursday afternoon.

Columns of Army, NDRF personnel, Air Force helicopters and 300 marine commandoes were deployed for rescue and relief operations, while flight operations from five airports in Porbandar, Diu, Bhavnagar, Keshod and Kandla were suspended.

Around 2.75 lakh people were shifted and more than 500 villages have been evacuated from the coastal regions in view of the Cyclone Vayu approaching the Gujarat Coast, the government said.

Gujarat Chief Minister Vijay Rupani chaired a meeting with senior state officials, officers of the Army and NDRF and District Magistrates to take stock of the situation.

"47 teams of NDRF have reached Gujarat and over 5 more teams will reach by Thursday morning. Army, Air Force, Navy, Coast Guard have taken their positions. State Disaster Management is at work. Police patrolling will be done throughout the night so that no one is left in the lower regions," Rupani said after the meeting in Gandhinagar.

Chief Minister Rupani said that all sea-related activities have been stopped and all departments have been put on alert. "Senior Ministers and Senior Secretaries have been sent to control rooms of district administration and they are monitoring the situation," he said.

Additional Chief Secretary (Revenue) Pankaj Kumar said that schools, colleges and Anganwadis would remain shut on June 12 and 13 in the coastal districts.

Praying for the safety and well-being of all those affected by Cyclone Vayu.

The Government and local agencies are providing real-time information, which I urge those in affected areas to closely follow.