Army, IAF teams on standby for rescue and relief operations along coastal areas. 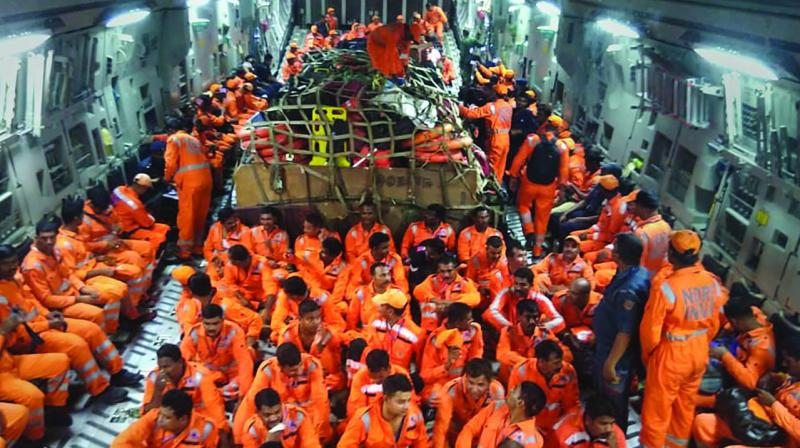 NDRF members seen inside the IAF C-17 aircraft as it lands at Jamnagar, Gujarat, on Wednesday. (Photo: PTI)

Ahmedabad: With cyclone Vayu inching closer to the coastal area of the Saurashtra region of Gujarat, more than 2.15 lakh people were evacuated from the coastal area and shifted to a temporary shelter on Wednesday.

The cyclone (Vayu) over the East-Central Arabian Sea was located around 300 km south of Veraval in Gujarat, moving at a speed of 18 km per hour. Turning into a very severe cyclonic storm, Vayu is likely to make a landfall between Porbandar and Veraval anytime from Wednesday midnight to Thursday morning at a much faster speed than anticipated earlier. The weather in the coastal region of the state began changing on Wednesday morning itself, with very high tide in the Arabian Sea.

According to the IMD bulletin, cyclone Vayu on Wednesday moved northwestwards at a speed of around 11 km per hour over the East-Central Arabian Sea. It was predicted to move nearly northwards and cross the coast of Gujarat between Porbandar and Diu around Veraval at a speed of 145-155 km per hour, likely to escalate to 170 km per hour on Thursday morning.

The direction of the cyclone, however, changed on Wednesday evening, and it is now likely to strike anywhere between Porbandar and Varaval on the Saurashtra coast by Thursday afternoon. Total 10 districts and 408 villages of the Saurashtra region of the state are likely to be impacted.

In the wake of the approaching cyclone and its severity, the state administration has started evacuating people living near the coastline. Air services connecting to the Saurashtra region and railway and bus services connecting to the coastal areas have been cancelled. Total 47 teams of the National Disaster Response Force (NDRF) and 11 teams of the State Disaster Response Force (SDRF) have been deployed. Army, Navy, and Air force teams have also been kept on stand-by to meet any situation.

“We are taking all possible precautions. With our zero-casualty approach, the state administration is ready to meet any situation,” chief minister Vijay Rupani said on Wednesday. The state government cancelled the state Cabinet meeting, and all ministers and officers were asked to visit coastal areas to monitor the situation.

The state government is also taking steps to protect animals. “There are three groups of lions living in low lying areas. We want to locate them and move them to a safer area,” a forest official said.

The forest department has sent 10 teams to Jafarabad, Amreli district to locate the lions living in the area.