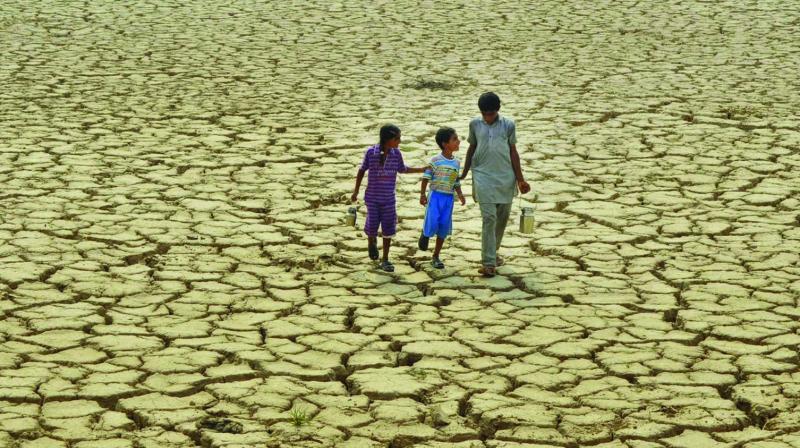 The crisis is so bad that those who hope to win the race for the last water reserves are drilling deeper and deeper into the ground leading to a precipitous drop in water tables across India by an average of 0.3 metres per year and by as much as four metres in some place — the world’s fastest rate of groundwater decline.

While the world has significantly improved food security, it is now faced with a mounting challenge on a more major front: water insecurity. Water has been crucial to all civilisations. In India, however, it is of much more importance as over 600 million people get their food and livelihood from the water that irrigates their land. Most of them depend on monsoons to replenish their water sources. But the truancy of rain leaves them vulnerable. Every year, the country breaks out in a cold sweat whenever the south-west monsoon is delayed. It is India’s bad luck that while it has plenty of land, there is scant water to cultivate it there are stories of areas of people of waiting for successive years for rain that never arrived in several regions. Once green pastures have been scorched to dust and livestock emaciated as rainless years left the land bone dry.

India was not the highest extractor of groundwater in the 1960s and ’70s; the Green Revolution changed that. During the Independence the share of groundwater in agriculture was 35 per cent; today it is a startling 70 per cent. At 260 cubic km per year, our country is the highest user of groundwater in the world — we use 25 per cent of all groundwater extracted globally, more than China and the United States combined. It is groundwater that boosted the Green Revolution and brought us food security but today we are in danger of “killing the goose that laid the golden egg”. We have drilled deep for groundwater without taking this basic hydrogeological fact into account. The entire aquatic ecosystem is now in peril. The worse plight is of those who have no water even for their basic needs. They dig and dig through dusty layers of the dry and parched earth in the hope of reaching the last inches of precious fluid below.

The lack of sustainable agriculture sucks rivers, lakes and underground water sources dry. Agriculture has also followed skewed and short-sighted path as food crops have been gradually abandoned in favour of cash crops such as sugarcane, rice and wheat which are highly profitable but requires huge volumes of water.

Sugarcane consumes about 22.5 million litres of water per hectare during its 14-month long growing cycle compared to just four million litres over four months for chickpeas, commonly grown in India and called gram locally. Maharashtra is the epicentre of India’s farm quagmire and its landlocked Marathwada belt is in a miserable state. Farmers drawn to the region by government incentives began cultivating sugarcane, a water-intensive crop that is ill-suited to Marathwada’s semi-arid climate.

The area under sugarcane cultivation in Marathwada grew from to 1 metre hectares from 2004. Marathwada has the lowest ratio of actual irrigated land vis-à-vis irrigation potential in the state. Of the potential land that could be irrigated by dams created in the region, only 38 per cent is actually being irrigated. For the rest of Maharashtra, this ratio is at 76 per cent. The per capita income in Marathwada is 40 per cent lower than the rest of Maharashtra. Growing sugarcane in drought-prone areas is a recipe for water famine.

Buoyed by the monetary bonanza, farmers put up a race for sugarcane cultivation. The land area under sugarcane cultivation in the state has gone up from 167,000 hectares in 1970-71 and 300,000 hectares in 2002-2004 to 1,022,000 hectares in 2011-12 taking 70 per cent of the region’s irrigation water. Tragically Marathwada accounts for just four per cent of the cultivated land in the state. Maharashtra is India’s second-biggest producer of sugarcane, despite being one of the country’s drier states. Sugarcane’s sturdiness also attracts farmers — mature cane withstands heavy rainfall or dry spells and is also less vulnerable to pests and diseases compared to other crops.

A similar story is playing out in Punjab and Haryana, but with rice replacing sugarcane. Rice covers 62 per cent of Punjab’s area under cultivation, which was 10 per cent in 1970. The expansion of rice has been similar in neighbouring Haryana. Though the droughts have hit all crops, India still produces more rice, wheat and sugar than it consumes.

The government currently asks farmers to switch from rice to oilseeds and pulses but does little to support such a change. Moreover, in order to pander to the political class, the government supplies free or subsidised power. Even though minimum support prices (MSPs) are currently announced for 23 crops, the most effective price support is for sugarcane, wheat and rice. This creates highly skewed incentive structures in favour of these water-intensive crops. Without government intervention to reset the revenue balance in favour of less water-intensive crops, experts warn of further depletion in scarce water resources. It will be sound economics as well as ecology for India to make a large-scale switch from water-intensive crops to less thirsty ones and rely on wetter climates for replenishing its deficit of water guzzling crops.

The crisis is so bad that those who hope to win the race for the last water reserves are drilling deeper and deeper into the ground leading to a precipitous drop in water tables across India by an average of 0.3 metres per year and by as much as four metres in some place — the world’s fastest rate of groundwater decline. On account of this, the water level in the wells is not being topped by the underground aquifers.

During the last three decades, there has been an explosive growth of private tubewells because of a lack of reliable surface irrigation. Some farmers in parched states now need to dig 300 feet (91 metres) for water, compared to five feet (1.5 metres) in the 1960. They’ve been drilling wells deep beneath the tilled soil into the volcanic rock — 700 feet, 800 feet, even 900 feet down.

India extracts 230-250 cubic kilometres of groundwater each year constituting about one quarter of the world’s total. Farmers using groundwater obtain twice the crop yields compared to surface water. This is because groundwater irrigation gives farmers more flexibility as to when to irrigate.

Much of the blame for India’s plight must lie at the doors of the political class which has shown no seriousness, despite dire warnings. There are several alternate cultivation systems that help conserve water and could have been promoted actively. One of them is ratooning. Ratooning is the agricultural practice of harvesting a monocot crop by cutting most of the above ground portion but leaving the roots and growing shoots intact so as to allow the plants to recover and produce a fresh crop in the next season.

Realising its predicament decades ago, Israel studied the “water equation” and introduced revolutionary innovations to make itself all but independent from mother nature. Israel took 70 years to solve its water problem; India won’t need that long, as it can replicate Israeli practices. It needs to summon the political will to act before water runs out. Changing governance, raising money and experimenting new ideas will all take time and the climatic stresses are mounting fast. The time to act is now.