India   All India  13 Jun 2017  Cong leader Scindia released on personal bond after being arrested in MP
India, All India

Mandsaur has become the epicentre of a farmers' agitation over a demand for loan waivers and better prices for their produce. 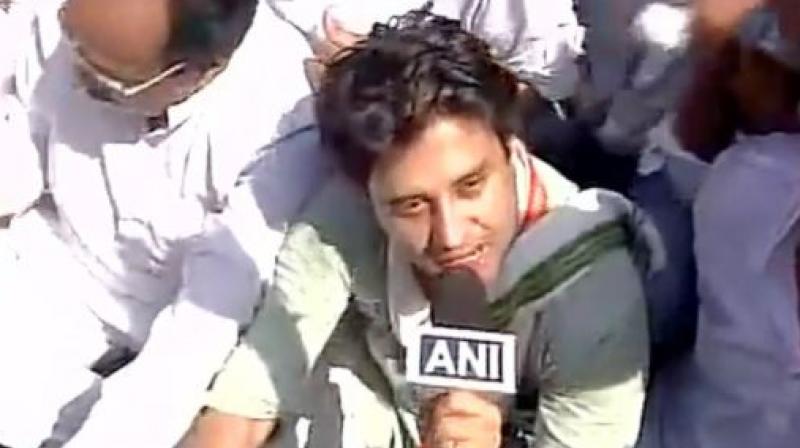 Jyotiraditya Scindia along with his supporters stopped from entering into Mandsaur. (Photo: ANI | Twitter)

Dhodar (Madhya Pradesh): Congress leader Jyotiraditya Scindia was released on a personal bond after being arrested under Section 151 near Mandsaur on Tuesday.

Scindia along with his supporters were stopped from entering Mandsaur at Dhodar while en route to meet the kin of farmers' killed in police firing during an agitation.

Section 151 in The Indian Penal Code (IPC) refers to a situation wherein a person or persons knowingly join or continue in assembly of five or more persons after being commanded to disperse.

Whoever knowingly joins or continues in any assembly of five or more persons likely to cause a disturbance of the public peace, after such assembly has been lawfully commanded to disperse, shall be punished with imprisonment of either description for a term which may extend to six months, or with fine, or with both.

If the assembly is an unlawful assembly within the meaning of section 141, the offender will be punishable under section 145.

(I have told the police that if I am charged with 144 then I will go alone. Who can stop if a person wants to go alone?)

Gujarat's Patidar quota stir leader Hardik Patel earlier in the day was detained in Madhya Pradesh's Neemuch district who had also come to visit the kin of farmers' killed in police firing.

Hardik led a violent movement in Gujarat last year over a demand for quotas for Patidars.

Mandsaur has become the epicentre of a farmers' agitation over a demand for loan waivers and better prices for their produce.

A number of political leaders, including Congress vice-president Rahul Gandhi, and social activists tried to visit Mandsaur but the police didn't let them enter the area.

The curfew has been lifted from Mandsaur, but prohibitory orders remain.

Meanwhile, the state government has issued a notification for the judicial probe of the Mandsaur violence. Retired Justice J K Jain will head the one-member judicial commission.

The single member commission will probe under what circumstances the farmers were killed in the agitation.

The commission will also probe the action taken by the administration and police to control the situation was appropriate or not.