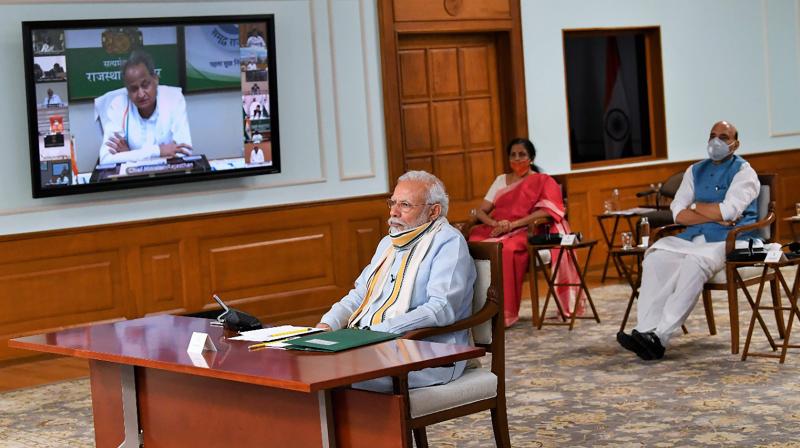 Prime minister Narendra Modi interacts with chief ministers during a video conference on the COVID-19 situation on Monday. (PTI)

“Be vocal for local” – that’s the message prime minister Narendra Modi conveyed to the nation as he announced a Rs 20 Lakh crore package to revive India’s coronavirus-ravaged economy. Amounting to 10 per cent of India’s GDP, the package includes the previously announced packages of the Reserve Bank of India.

In his third address to the nation since the nationwide lockdown began on March 25, Modi urged Indians to push the country towards becoming economically “aatmanirbhar” or self-reliant. He also expressed his support to local manufacturing to become globally competitive, while coining a term for posterity – “Think local, go global”.

The package to make India an "aatmanirbhar" nation will be announced by finance minister Nirmala Sitharaman starting Wednesday.

This will be India’s century: Modi

While pushing for some modern form of autarky – an economic ideology which promotes economic self-sufficiency, Modi said the coronavirus pandemic will change the world order significantly and open up opportunities for India.

In fact, the prime minister took the example of local manufacturing of N95 masks to highlight India’s economic ability to stand on its own. He noted that India did not have enough resources to manufacture N95 masks when the pandemic began. However, now, India manufactures at least 2 Lakh such masks daily, he added.

The Prime Minister also gave his own spin to the idea of self-reliance: “When India talks of self-reliance, it means the welfare of the world.” He added that nations have been looking to India for creating wonders for the world.

Modi said the post-Covid India will be supported on five pillars: (1) Economy – A quantum jump in the economy; (2) Infrastructure – An infrastructure that can be the new image of India; (3) System – a system that can fulfil the dreams of the 21st century: (4) Demography – India’s demography is vibrant. (5) Demand – the demand and supply chain need to be utilised and strengthened.

The Prime Minister said the package will touch upon four Ls – Land, Labour, Liquidity, Law – and added that local manufacturers like MSMEs and cottage industries will be benefited from the Rs 20 Lakh crore financial package.

“We need to expand our reforms now. We will alleviate problems in the supply chain. We will focus on strengthening the infrastructure and improve human resources. We will simplify tax systems too. These will help us in being competitive in the global supply chain,” he said.

“We have now learnt the use of local manufacturing due to coronavirus. Local is the responsibility. Local should be made our life mantra. Even local brands were once local. But once they were used and branded, they became global. From today, every Indian needs to be vocal for local,” he added while stressing on “aatmanirbharta (self-reliance)”.