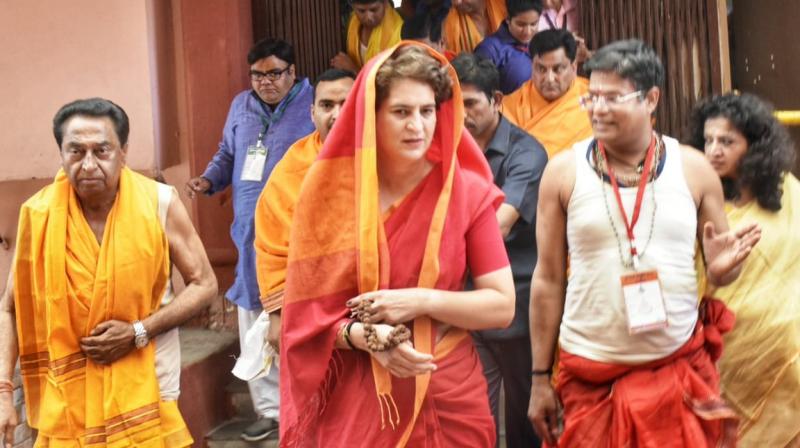 Wearing a red coloured saree, Priyanka performed a pooja at the temple along with Kamal Nath. (Photo: Twitter | @OfficeOfKNath)

Ujjain: Ahead of the last and final phase of the Lok Sabha polls on Congress general secretary Priyanka Gandhi Vadra and Madhya Pradesh CM Kamal Nath offered prayers at the Mahakaleshwar Temple in Ujjain on Monday.

Wearing a red coloured saree, Priyanka performed a pooja at the temple along with Kamal Nath.

"Today, at the Mahakal temple in Ujjain, the national general Secretary, @priyankagandhi offered Pooja Archana and sought the blessings of Baba Mahakal for happiness and prosperity of the region. Jai Baba Mahakal," Kamal Nath posted on twitter.

Former Madhya Pradesh chief minister Shivraj Singh Chouhan welcomed Vadra to the state and asked her to ensure those farm loan waivers, which was promised by the Congress party is fulfilled.

"When you offer prayers at Mahakaleshwar Temple, you must ask Kamal Nath and Rahul Gandhi to waive farm loans off. Rahul had promised to write off loans within 10 days after coming to power. Now, they should tell the farmers when they will waive off their loans," Chouhan said.

The Congress had on May 7 handed over to Shivraj Singh a list of 21 lakh farmers whose loans had been waived off by Chouhan.

Eight constituencies of Madhya Pradesh go to polls on May 19, the last phase of the seven-phase Lok Sabha 2019 elections.