Modi said 'hua to hua' are not just three words but reflect arrogance of the Congress. 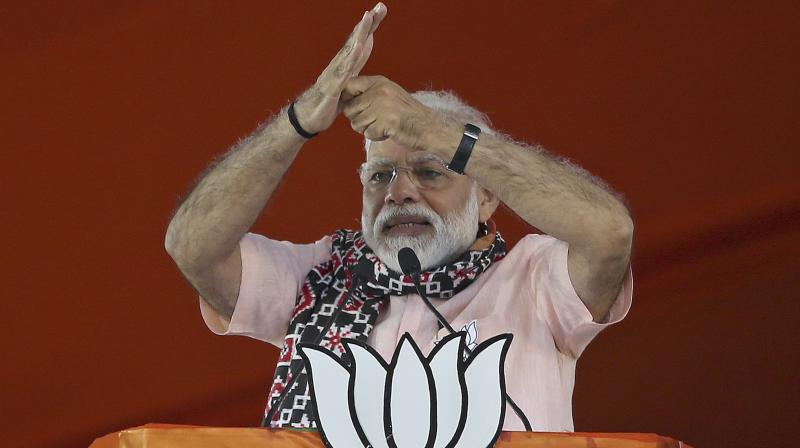 Targeting the Kamal Nath government in MP over its alleged failure to implement its loan waiver promise in the state, Modi likened people to God and said, 'The Congress cheated God.' (Photo: File)

Ratlam: Prime Minister Narendra Modi on Monday stepped up his attack on the Congress over its leader Sam Pitroda's hua to hua (It happened, so what?) remark on the anti-Sikh riots in 1984.

Targeting the Kamal Nath government in MP over its alleged failure to implement its loan waiver promise in the state, Modi likened people to God and said, "The Congress cheated God."

He said the Congress had a problem saying 'Bharat Mata ki Jai', but was happy abusing him. Modi also took a jibe at Congress veteran Digvijay Singh, who is contesting the Lok Sabha polls from Bhopal, for not casting his vote. The fourth and last phase of Lok Sabha polls in the state will be held on May 19.

Claiming a strong pro-incumbency wave in his favour, Prime Minister Narendra Modi on Monday slammed political pundits 'for failing to perceive nerve of first-time voters and women and planting new stories every day.'

"The pundits, who are claiming that there is no wave and plant new story sitting in Delhi every day, don't know about the first time voters and women who support me. Mother and sisters are supporting me because we made a law that gives the death penalty to rapists," said Modi while addressing an election rally here.

Modi also slammed Congress leader Digvijaya Singh for not casting his vote saying, he has set a negative example for the first-time voters. Digvijaya is contesting the Lok Sabha polls against BJP's Pragya Singh Thakur from Bhopal.

"Those first-time voters who are born at the end phase of the 20th century or in the beginning phase of the 21st century will vote - keeping in mind the 21st Century. They have to spend their life in this century including their education, health and everything. Hence the first phase or the starting phase of the century should be stronger so that the whole century becomes good," said Modi.