India   All India  13 May 2019  All-women team of Dantewada police to fight against red terror
India, All India

All-women team of Dantewada police to fight against red terror 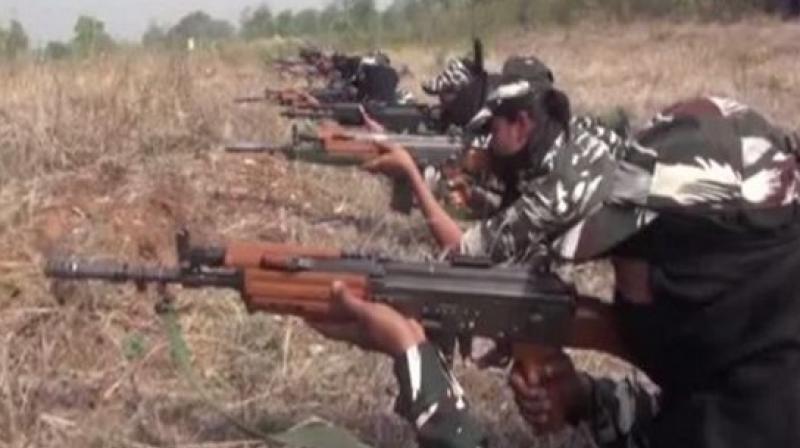 Dantewada: In a first, Chhattisgarh Police will be deploying a special group of women commandos in the Naxal -infested Bastar region of Dantewada district.

The special group of 30 women commandos also includes five former Naxals who previously dreaded in the region. They have been named 'Danteshwari Fighters' and are undergoing strenuous training at present. The contingent is a part of District Reserve Guards (DRGs), the front line fighters in Bastar, against red terror.

Deputy Superintendent of Police, Dineshwari Nand, is overseeing the training of the first women-only DRG team which will soon be taking on Naxals along with a similar group of the Central Police Reserve Force (CRPF).

"District police does not have any women fighters so far. They will be inducted as the sixth DRG team to fight against Naxalism. Surrendered Naxals, local recruits and assistant constables of Dantewada police have been included in this team," Nand gave details of the team to ANI.

The group comprises locals and former Naxals, similar to 'Bastaria Battalion' put together by CRPF last year. "My husband, who was in the police, was killed by Naxals. I want to avenge his death. They killed my husband, I will kill them," said a recruit.

The fighters being trained by police now are well versed with local terrain, which will prove to be an asset for the government. The dense forests of the Bastar region are their temporary homes and training grounds for now.

Another member of the team said, "When our family members were killed by Naxals, we felt that we should do something. Now that we are being trained, we feel great."

High on woman power, the teams of police and CRPF will soon be taking on Naxals under the leadership of Assistant CRPF Commandant Aastha Bhardwaj and DSP Dineswari Nand.

"We are providing them with physical training to enhance their stamina and to cope up with the adverse condition. We are also training them to ride bikes because there are high chances of IED blasts here. So we seldom use big vehicles. They will be patrolling on bikes and will be fully trained within two to three months," Nand explained.

Apart from maintaining law and order, the objective of the formation was to also get women Naxals into mainstream forces.

"We were captured by the police when we had come home on leave. A family member of one of our friends, who was in the police, persuaded us to join the police force. They told us that I would get a better life here so we changed our mind and surrendered," Naxal-turned-recruit Sunita said.

Another recruit, who veiled her face before speaking, said that the team knows the region and will not face problems in carrying out operations.

The main focus was on weapons training and jungle warfare tactics, CRPF Assistant Commander Aastha Bhardwaj said about the central force's 'Bastaria Battalion'. "We have also given them indoor classes on human rights issues," she added.

They have done a good job in road security and other operations in Bijapur, Karker and Narayanpur districts," he said.