India   All India  13 May 2018  Narendra Modi ​wants to keep people away from reality: Sitaram Yechury
India, All India

Yechury said that anti-romeo squad and private armies like cow protection groups were being raised and constitutional institutions attacked. 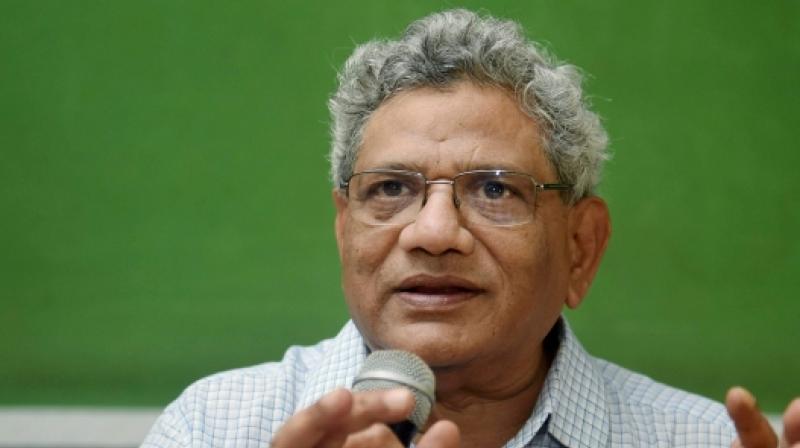 Bhubaneswar: CPI(M) General Secretary Sitaram Yechury on Saturday accused the Narendra Modi government of keeping people away from the reality and called upon all secular parties to join hands to oust the NDA government at the Centre.

"Like Manmohan Desai's formula films, Modiji keeps people away from the reality by giving a new slogan everyday. People do not find time to think about the slogan given the previous day," Yechury said at a seminar on "Role of Left in Current National Situation".

Alleging that giving slogans was a strategy of Modi, he said, "The prime minister did not speak on the current situation of the country while campaigning in Karnataka. He often speaks on (Jawaharlal) Nehru and (Sardar Vallabhbhai) Patel instead of saying what he has been doing."

Yechury alleged that anti-romeo squad and private armies like cow protection groups were being raised and constitutional institutions attacked.

The country's unity was in danger, he claimed.

Minority communities and Dalits were being attacked in the BJP-ruled states, he alleged.

"The Centre went on making money when international crude oil price was low. Instead of taking steps to control the price of fuel, Modiji gives slogans like Make In India, Start Up India, Stand Up India and many more," he said.

Terming the Modi government a "pro-rich" dispensation, Yechury alleged that the country's economy was demolished in the last four years due to wrong policies.

"The Government of India figures say that only one per cent of population has 73 per cent of wealth in India. The rest are left for exploitation," he said adding that the central government waived loans of about Rs 2 lakh crore for the corporate while it wasn't ready to give relief on farm loan which is worth only Rs 1 crore.

"Now, the Centre has allowed Walmart to acquire Flipkart. This will affect about 20 per cent of the country's population. This may also add to the rise in the rate of farmer suicides in the country," Yechury claimed.

The government did not raise the minimum support price of agricultural products by one and half time despite its assurance to the people before the 2014 Lok Sabha elections, he said.

Charging the BJP of not keeping the promise of providing jobs to two crore people every year, he said three major Information Technology companies had announced to go for massive retrenchment.

Banks were being looted and the value of their NPA was about Rs 11.5 lakh crore, he claimed.

On the international relationships, Yechury said, "The prime minister's priority during Nepal visit is to run a bus from Jankipur to Ayodha and nothing else. The PM should realise that the people had changed the Hindu kingdom of Nepal to a democratic republic with a constitution."

He also criticised India's inclination towards the US and Israel. "The US-Israel-India axis could pose a great threat to the India's philosophy. All Indians in Gulf nations will be in danger," Yechury claimed.

He said all the secular forces should come together and save India.