India   All India  13 May 2017  Triple talaq is not ordained by God, is sinful, says Salman Khurshid
India, All India

Triple talaq is not ordained by God, is sinful, says Salman Khurshid

Khurshid said something that is sinful in the eyes of the God can’t be legal and ‘triple talaq’ can’t be fundamental to religion. 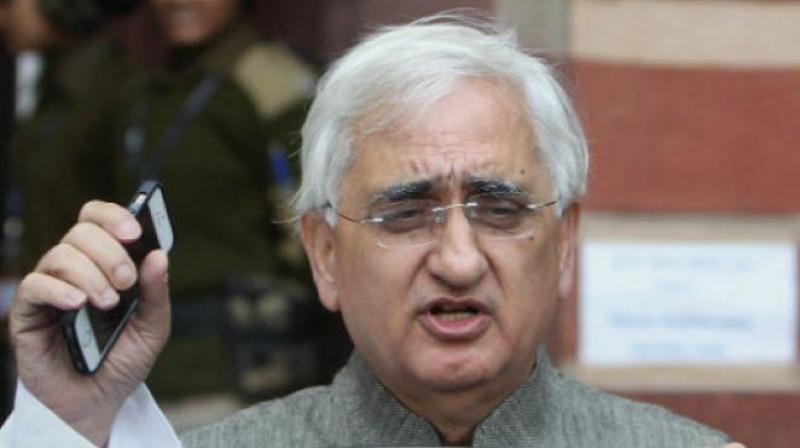 New Delhi: Former Union law minister Salman Khurshid on Friday asserted in the Supreme Court that ‘triple talaq’ form of divorce in one stroke is sinful and said that anything sinful could not have been ordained by Islam.

Making his submissions before a five-judge constitution bench of Chief Justice J.S. Khehar and Justices Kurian Joseph, Rohinton Nariman, Uday Lalit and Abdul Nazeer, Mr. Khurshid said a sinful act like ‘triple talaq’ could not be part of the Shariat law. He said the All India Muslim Personal Law Board says ‘triple talaq’ is an abhorrent practice, sinful but is valid in law. Mr Khurshid said: “I cannot imagine any religious law that will validate a sin.”

Justice Kurian Joseph asked Mr Khurshid “can anything sinful be taken as ordained by God and made a law by men? It cannot be a law made by men, even if it is valid. There is no sin in law but it is only in the eye of God.”

Mr Khurshid said something that is sinful in the eyes of the God can’t be legal and ‘triple talaq’ can’t be fundamental to religion.

He submitted the Shias and Malikis do not recognise the validity of the talaq-ul-bidat, while the Hanafi and Shafi agree in holding that a divorce is effective, if pronounced in the biddat form, “though in its commission the man incurs a sin”. The Shia law says there is general consensus that triple divorce at one time will be counted as only one divorce though it is pronounced in several numbers and Imamia sect of Shia has faith that such divorce is no divorce.

Senior advocate Ram Jethmalani, appearing for one of the victims of triple talaq, said the ‘triple talaq’ is invalid and unconstitutional and violative of Article 14 (equality before law) as the right of divorce is available only to the husband and not the wife.

This method is abhorrent to the Holy Quran and the Prophet. It is not only sinful but also repugnant to the teachings of Prophet. The whims at the hands of the husband is the highest constitutional violation and against the spirit of Directive Principles of State Policy under the Constitution, he said.

Mr. Jethmalani said if secularism has to become a reality then Uniform Civil Code under the Directive Principles must be enforced. The State had an obligation to bring UCC but lawmakers have not done that. CJI Khehar then compared “Triple Talaq to death penalty and said it is  abhorrent but permissible in law.”

Former Union Minister Arif Mohd Khan for an intervener said triple talaq is not fundamental to religion and it violates everything that Islam has spread. It is pre-Islamic and akin to the practice of burying alive young girls. Arguments will continue on May 15.

When the CJI asked Mr Khurshid how extensive is the use of ‘triple talaq’ outside India, the counsel said ‘triple talaq’ is not practiced in any other country and is in use only among Indian Muslims. In many Muslim countries across the world, domestic law no longer recognises ‘triple talaq’ as a valid form of divorce. More countries in the Islamic world have come to realise that ‘triple talaq’ does not have any foundation in the teachings of Islam; and certainly not any place in the modern world under Islamic law.

When CJI observed “if triple talaq is India specific, then what led to its repeal in other countries?”, Mr Khurshid said, “Whatever is happening in India may have happened outside earlier to make those countries to decide for repeal of triple talaq.”