India   All India  13 May 2017  Punjab: No cash, no ambulance, son compelled to carry father's body on cart
India, All India

Punjab: No cash, no ambulance, son compelled to carry father's body on cart

A labourer was compelled to carry his father's body on a cart as he was unable to pay Rs. 400 to a private ambulance carrier. 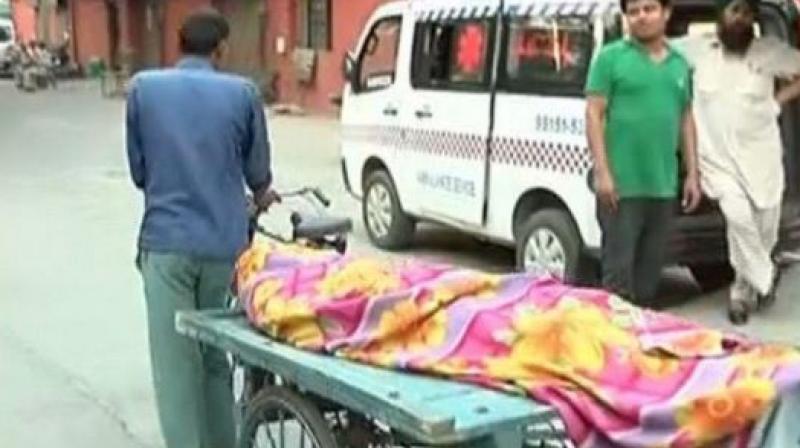 Sarabjeet had admitted his father to the hospital on Sunday, who then passed away Thursday. (Photo: ANI/Twitter)

Jalandhar: Yet another case of administrative apathy, this time in Punjab, came to fore when a labourer was compelled to carry his father's body on a cart as he was unable to pay Rs. 400 to a private ambulance carrier.

After being denied an ambulance from the civil hospital, Sarabjeet's (son) relatives arranged for a cart, on which he then carried his father's body. After some time, the son then took the body in an auto in Rs. 150 rental.

"The driver of the ambulance demanded Rs. 400, but I had no money to pay. Later, one of my relatives brought a cart and we took the body on it," said Sarabjeet.

Sarabjeet had admitted his father to the hospital on Sunday, who then passed away Thursday. Upon demanding an ambulance, the hospital informed that it did not have their ambulance service. On calling the private ambulance, it demanded Rs. 400.

The civil hospital administration said they only provide ambulance facility to bring patients to the hospital.

Medical superintendent Kamaljeet Singh Bawa said they do not have facility to carry dead bodies back to their homes. However, he said the same has been conveyed to the government.

Incidents of administrative apathy continue to surface in Madhya Pradesh also. The latest to be reported was from the state's Sidhi district where a family was forced to strap the body of their dead son to a bamboo pole and transport it to the mortuary. This had happened because the Sidhi Municipal Corporation refused to provide them with a hearse van, saying drivers were not available.

The deceased has been identified as Munesh Kol and was reportedly drunk hours before his death.

Unfortunately, this has not happened for the first time in Sidhi district. Earlier also, a family had carry the body for five kilometers to their home from the hospital as the mortuary vehicle service reportedly denied to the poor in the area.