India   All India  13 May 2017  He is a hero, his death won’t go waste: Top Army commander visits Fayaz’s family
India, All India

The GoC of south Kashmir- based Victor Force praised the 'brave family' of the officer and said the Army will always stand by them. 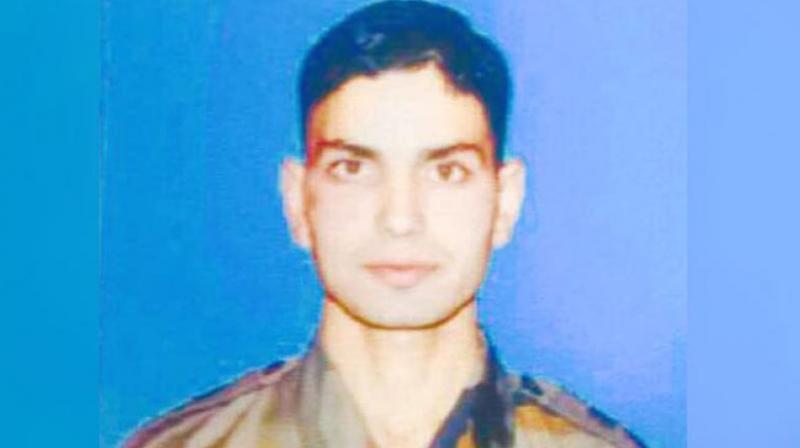 Behibagh (JK): A top Army commander on Saturday met the family members of Lieutenant Umar Fayaz, who was killed by militants in south Kashmir on Wednesday, assuring them that the culprits will be punished soon and the young soldier's sacrifice will not go waste.

The General Officer in Command (GoC) of south Kashmir- based Victor Force, Major General B S Raju, who visited Fayaz's residence on occasion of chahrum (the fourth-day mourning), praised the "brave family" of the officer and said the Army will always stand by them.

"He is a hero because his battle started five years back when he decided to join the NDA.... He has fought that battle successfully and his death will not go waste,” Major General Raju said.

The commander told the bereaved family that Fayaz was a martyr and that people, even though silent, were with them.

He announced that the army school in Behibagh will be named after Fayaz. The army commander handed over a cheque of Rs 75 lakh under the army group insurance fund to Fayaz's parents.

The commander said the militants who carried out the cowardly act will be brought to justice.

"I want to say that whichever militants did that, we will take action against them and that action will be done in our own way and will take place soon.

"Also, whenever operations will take place, we will ensure no harm to the civilians. We do not want to disturb the peace. We want to ensure that our operations do not affect the civil population," he told reporters.

The operations will be directed only against the militants who have done this particular cowardly act, he said. Major Gen Raju said Lt Fayaz was a brave soldier who made a difference by joining the army.

"His battle started when he decided to join NDA. I would like to give credit to him and his parents who decided that they will enrol him into the NDA.

"Even as he had just had four months of duty, still, from my point of view, he is a hero."

He said by killing the young officer, the militants extinguished a lamp which was spreading light in the area.

"That lamp which could have lit up 100 more lamps and created a new wave here.

"I am sure that even after being extinguished, this light will still be there and to keep this light from fading out, we are renaming the army goodwill school here in Behibagh to Shaheed Lt. Umer Fayaz Goodwill School," he said.

The GoC said Fayaz's family is brave and they have shown hope even in this hour of grief.

"We met his family. It is a very brave family. Even in  this hour of sadness, there was hope. They showed hope for the future of their two daughters.

"We want to assure that our support will be there as long as the army is there in the Valley," he said.

The regimental unit gave Rs one lakh to the family. The district administration also gave an advance cheque of Rs one lakh in compensation.

Asked whether there was any advisory like the one issued by state police to its personnel asking them to refrain from visiting their homes for some time, Major Gen Raju said,

"There is no such advisory. But yes, we have said that anybody who is coming into the areas, he should inform the nearest army camp so that we can provide security to him".

The 22-year-old Army officer was abducted and killed by militants after he had gone to attend a relative's wedding in Shopian district of Kashmir.