Karnataka CM conduct checks to get up-close view of lockdown

Yediyurappa said that the government had worked out a detailed plan to ease problems of people, amidst close down 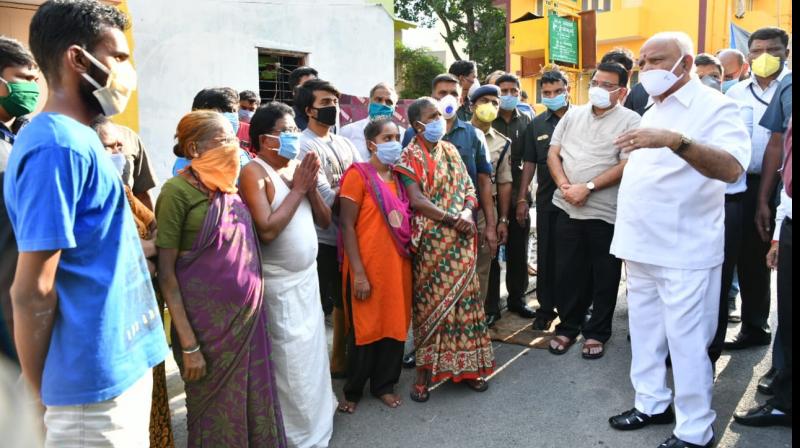 Yediyurappa went around western and southern parts of Bengaluru city, interacting with a cross section of people. (DC PHOTO)

Bengaluru: In a bid to get first hand information about life during the lockdown, Karnataka chief minister B S Yediyurappa went around western and southern parts of Bengaluru city, interacting with a cross section of people on Sunday.

While common people poured out their woes, even small-time businessmen had their own problems to tell. At the end of the day, Yediyurappa hinted that the government would introduce some relaxations in the lockdown after April 14.

Yediyurappa started his rounds from the Rajajinagar and Vijayanagar areas in west Bengaluru. In Vijayanagar, two places are completely sealed off while a strict lockdown is being implemented.

When the chief minister reached there, there were a series of complaints from the residents as well as small traders.

While the residents complained that they could not get essential commodities as well as medical facilities, the small traders, especially roadside vendors explained their problems regarding perishable goods like fruits and vegetables.

Yediyurappa said that the government had worked out a detailed plan to ease problems of people, amidst close down.

He asked the people to wait for two days, so that the government would ensure that their needs would be taken care of.

During his visit to Padmanabhanagar in Southern Bengaluru, chief minister had a group of daily wage workers and domestic helps. Since lockdown, they did not had jobs and they were wondering how could they pay house rents.

While promising that their household needs would be taken care by government, Yeddyurappa could not reply on rent. He only asked them to wait for two days before government came out with it's plan.