How Kerala is poised to win the fight against Covid-19 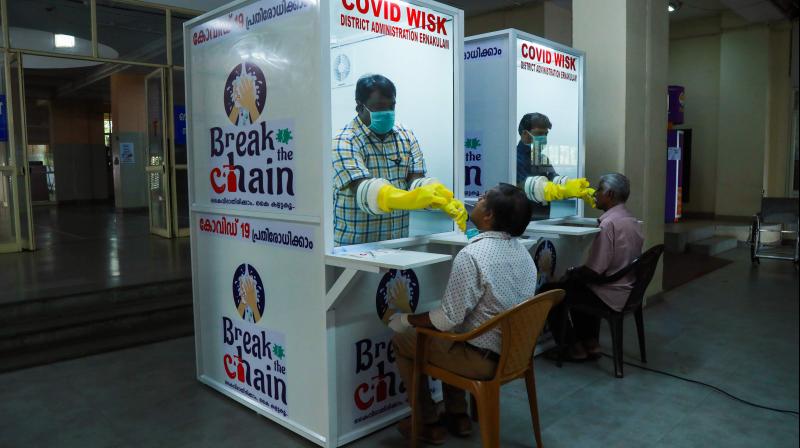 Medical staff collect samples from people at a walk-in sample kiosk (WISK) to test for the COVID-19 coronavirus at the Ernakulam Medical College in Kerala. (AFP)

Kochi: Of all of India’s states, Kerala is the best poised to win the fight against the novel coronavirus. As things stand, there’s a clear indication of a flattening of the infection curve in the state.

The number of fresh cases has fallen to the least in the country and the number of cured patients is escalating every day.

On Sunday, only two fresh Covid-19 cases were reported form the state, the least number in the past few weeks. On the same day, 36 patients recovered and emerged from quarantine.

If the state continues to maintain for another two weeks the current trend of fewer new cases and higher number of cured patients, it will have come out triumphant from the jaws of this killer epidemic.

The state of 35 million people is already being touted internationally as a model for fighting Covid-19.

The difference is stark when one compares Kerala and Maharashtra.

At the beginning of the lockdown period, both states started out with almost the same number of Covid-19 cases. On March 26, Maharashtra had 122 corona positive cases and Kerala 120.

In the three weeks since then, the number of corona positive cases in Kerala has risen to 375 positive cases, with 179 cured patients and two deaths, while Maharashtra’s numbers ballooned to 1895 cases and 127 deaths.

Though the first Covid-19 case in Kerala was reported on January 30, the death rate has been only 0.54 per cent, which is way below the global average of 6.12 per cent. Only two deaths have been reported in the state so far though the number of confirmed cases is 375.

In contrast, worst-hit countries like Italy have a mortality rate of 12.78 per cent while in the US the fatality rate is 3.94 per cent.

Though Kerala was the state with the highest number of positive cases in the country for a couple of weeks, the state has since then kept the infection and death rates relatively low despite aggressive tracing and testing.

Ratio of positive cases to number of tests

As of April 12, Kerala sent 14,989 samples for the Covid-19 diagnosis test, of which 13,802 came back negative. The state tests at the rate of 400 per million, which is much higher than the test rates in most of the other states. Delhi also has a high number of Covid tests.

The recovery rate in Kerala also is the highest compared to other states and countries. Of the 375 corona positive cases confirmed in the state, 179 patients have been cured and discharged so far. That’s a recovery rate of 47.73 per cent, which is the highest in the country.

According to data from the Union Ministry of Health and Family Welfare, the total number of confirmed cases in India is 9152 while the number of cured patients is 857. The recovery rate is only 9.36 per cent.

In Kerala, seven districts were initially identified as Covid-19 hotspots: Kasargod, Kannur, Malappuram, Kozhikode, Thrissur, Ernakulam and Thiruvananthapuram. However, some districts like Ernakulam have not recorded even a single fresh case in the past one week. There has been a considerable decrease in the number of persons under observation as well.

Currently, Kasargod and Kannur have the highest number of patients under treatment and both these northern districts are under tight restrictions.

Health and police authorities say the active cooperation and support of the people was crucial in Kerala’s corona success story. Initially, all those returnees from abroad and from other states and their contacts strictly complied with the quarantine guidelines. Subsequently, adherence to health advisories like social distancing has been very good.

Kerala’s performance has received worldwide attention with several international media and experts citing the Kerala model as worthy of emulation.

The measures taken by the Left-ruled government such as free rations for all, exclusive shelters and facilities for several lakhs of migrant workers and temporary rehabilitation of the destitute during the national lockdown have also attained appreciation.