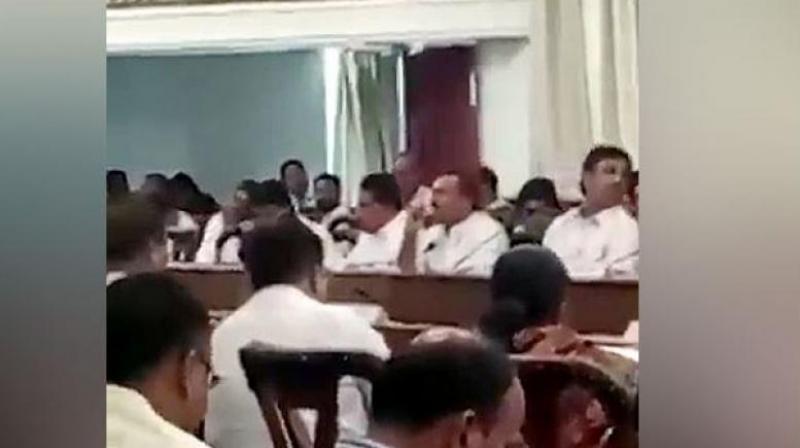 The BJP leaders were seen snacking on sandwiches and chips in a video that went viral. (Screengrab | ANI)

Pune: After Congress leaders were seen munching on ‘chole-bhature’ ahead of the day-long fast that the party observed earlier this week over a variety of issues, Maharashtra BJP leaders left the Narendra Modi government red-faced with some of its legislators found snacking on sandwiches and chips as the party along with the Prime Minister and national president Amit Shah observed a nation-wide fast on Thursday.

#WATCH BJP Maharashtra MLAs Sanjay Bhegade and Bhimrao Tapkir seen eating during a meeting in Pune yesterday. BJP had called for a fast yesterday against the opposition stalling parliament pic.twitter.com/BnCjkT2jDq

A video clipping of the two relishing on sandwiches and chips went viral on social media and was broadcast by television channels, even as embarrassed state BJP leaders kept mum.

In a statement, Maharashtra Congress President Ashok Chavan said that the "drama of fasting will not work anymore" as the people are no longer interested in government's false promises.

"In Pune, the BJP leaders were seen enjoying snacks in the middle of the fast, elaborate arrangements were made for serving snacks before launching the 'fast' and after completing it. This fast is just a farce," Chavan said dismissively during a media briefing.

"If somebody eats three hours before a fast, BJP finds it objectionable, but it is okay for them if they eat during the fast. The reason behind today's fasting programme is bogus, the sentiments are bogus and the fast itself is bogus," said state Congress Spokesperson Sachin Sawant.

Also Read: Congress in row over ‘feast before fast’

Incidentally, it is not clear how the video clip of the BJP legislators enjoying the snack during the fast came into the public domain as the party had issued strict instructions against any publicity stunts on social media networks.

The call for a day-long fast by the BJP leaders led by Prime Minister Narendra Modi was given to protest the disruption and washout of the second half of parliament's budget session.

The BJP alleged that the Congress did not allow parliament to function, initially on account of the bank scams. Thereafter, the YSR Congress and TDP created protested over the issue of special status for Andhra Pradesh and moved no-confidence motions against the government.