SC decided to examine, of its own accord, the Kathua gangrape and murder case. 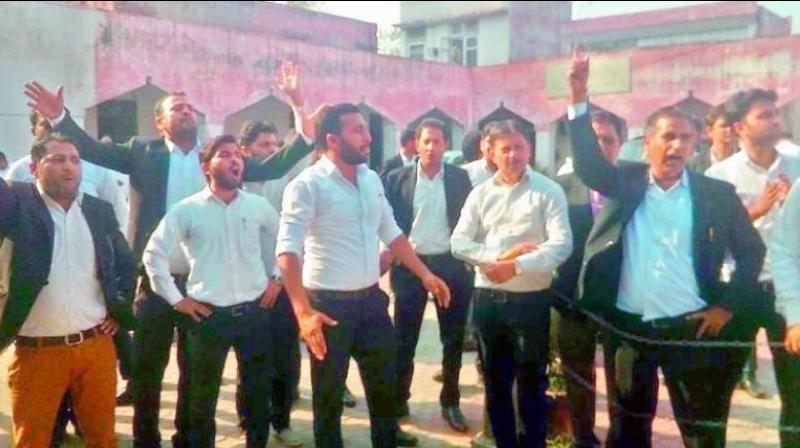 On Monday, a group of lawyers tried to prevent the crime branch from filing the chargesheet against the seven accused of the rape and murder case of an eight-year-old girl. (Photo: File)

Taking a serious note of the Kathua District Bar Association and the High Court Bar Association at Jammu striking work and opposing the filing of chargesheet, and obstructing the victim's counsel from representing the family, the apex court issued notices to the two associations.

The court said it is impermissible under law and ethics to prevent the filing of a chargesheet or oppose the representation of the victim's family by a lawyer.

According to a report in The Times of India, the SC bench added that every party before any court is entitled to engage a lawyer and if advocates oppose this principle then it would be destructive of justice dispensation system.

The apex court agreed to take suo motu cognisance of the case after several lawyers who had mentioned the matter before the bench came out with materials about the incident.

Earlier on Friday, the top court had asked a lawyer to bring materials on record to take judicial note of a strike call given by Kathua and Jammu and Kashmir bar associations in relation to the gangrape and killing of the eight-year-old girl in Jammu.

Advocate Shoeb Alam, appearing for Jammu and Kashmir, said that the police has filed the charge sheet before the magistrate on Thursday.

Alam, who was called to the CJI court, opposed the CBI probe as demanded by some apex court lawyers and said that thorough investigations were being carried out by the state crime branch. He said that it is already a settled law that investigation cannot be transferred to CBI after the charge sheet has been filed in the court.

"Police team was heckled by the lawyers and prevented from submitting the charge sheet before the CJM court in Kathua," Alam said.

He said that subsequently the police had to produce the accused in the case and submit the charge sheet at the residence of the magistrate.

On Monday, a group of lawyers tried to prevent the crime branch from filing the chargesheet against the seven accused of the rape and murder case of an eight-year-old girl.

The minor victim had disappeared from near her home in a village near Kathua in Jammu and Kashmir on January 10. Her body was found in the same area a week later. The crime branch of police which probed the case filed a main charge sheet against seven persons and a separate charge sheet against a juvenile in a court in Kathua district earlier this week.

The chargesheet revealed chilling details about how the girl was allegedly kidnapped, drugged, raped inside a place of worship before being killed.