A govt officer from UP's Ramnagar drove for 4 kms with villager hanging on his car's bonnet. Both have filed cases against each other. 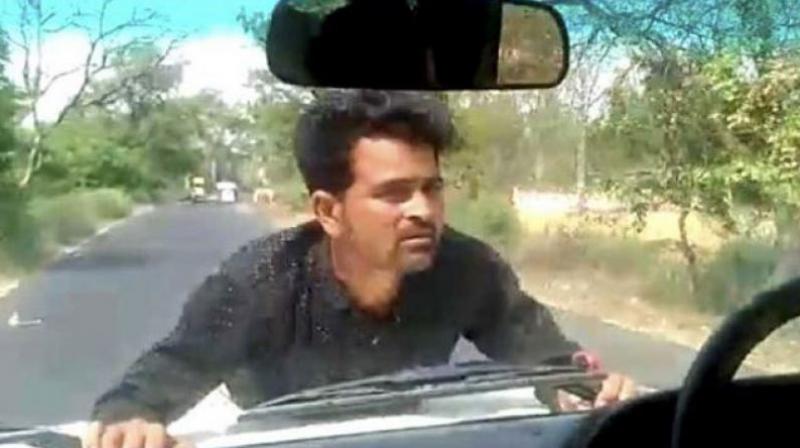 A man clings on to the bonnet of a car in UP's Ramnagar as a block development officer drives for 4 km. (YouTube | Screengrab)

Lucknow: Officials in Uttar Pradesh's Ramnagar have come across a bizarre  case where a video, which has gone viral on social media and is doing the rounds on WhatsApp groups, shows a man clinging on to the bonnet of a car while it sped away, with the driver wanting to teach him a lesson.

The man driving the vehicle is a Uttar Pradesh government staff, Ramnagar block development officer (BDO), and the one holding on to the car's bonnet because his life depended on it was a protester who along with others have gone to him to demand for second instalment for construction of toilets.

On Wednesday, a group of villagers went to block development officer Pankaj Kumar Gautam's office demanding the second instalment for construction of toilets in the village. After waiting for a while, they started protesting outside his office. Hours went by and no one attended to them.

When BDO Pankaj Kumar Gautam finally came out of his office, instead of acknowledging or addressing the needs of the protesting villagers, he headed straight for his car. The group followed him till the vehicle, which was parked close to his workplace. He quickly got in and turned on the ignition.

At this point, tired of waiting in the heat all day, a few of the protesters got angry and blocked his car, thereby disallowing him from leaving. He honked a dozen times and even tried to edge his way out. At this point, an irate villager, Brij Pal, jumped on to the bonnet of the official's car. This angered the official, who suddenly pressed the accelerator.

A few other protesters were quick to jump out of the way, but Brij Pal found himself hanging on the bonnet as the car sped out of the office block.

So angry was Pankaj Kumar Gautam with Brij Pal for jumping on his car that he decided not to stop and let Brij Pal step down outside the office. Instead, in a fit of rage, he drove the vehicle for four kilometres while Brij Pal held on.

At some point during his misadventure the BDO realised his actions could get him in trouble, so he made a video of Brij Pal hanging on to the bonnet of his car and decided to file a police complaint against him. Brij Pal too was seen making a few phone calls, perhaps to the police. When Brij Pal finally got a chance to get off four kilometres later, he warned the official and decided that he will not let the Pankaj Kumar Gautam get away with this serious offence.

Brij Pal could very well have lost his life because of Pankaj Kumar Gautam's actions and disregard for the law. Cross FIRs have been registered in the incident by both the parties at Aonla Police Station, the police said.

When Virendra Kumar Singh, the District Magistrate, heard of the incident, he immediately set up a three-member committee headed by the Chief Development Officer to investigate the incident.

Villagers have been demanding the release of funds for the second phase of construction of toilets, but haven't received it yet.