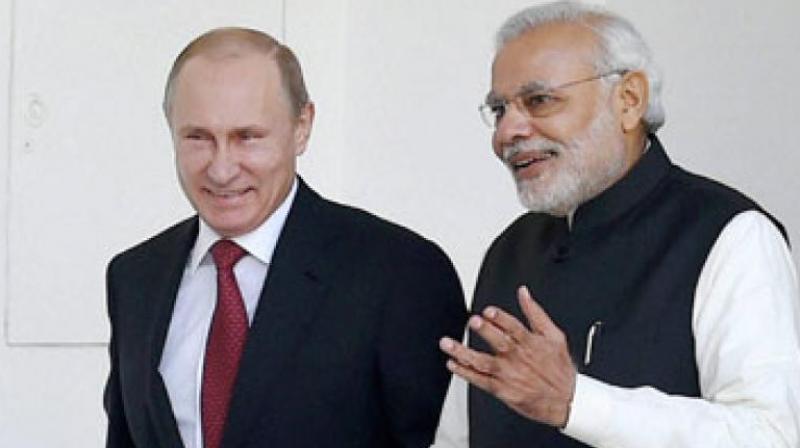 New Delhi: Prime Minister Narendra Modi and Russian President Vladimir Putin had a telephonic conversation on Wednesday, the MEA confirmed on Thursday but said it had no details of what was discussed. Sources said the phone call was initiated from the Russian side. But the conversation comes in the backdrop of souring of diplomatic ties between Russia and Britain over the poisoning of a former Russian intelligence operative staying in Britain with a toxic nerve agent.

Incidentally, PM Modi will also be visiting Britain shortly. On the attack, the Ministry of External Affairs (MEA) said New Delhi “awaits the outcome of the investigation”.

The MEA’s cautious reaction is being seen by observers as indicating that New Delhi does not want to annoy the Russians at any cost. Britain suspected some Russian involvement in the attack following which several European countries and the US had expelled Russian diplomats.

On Thursday, the MEA—commenting on that attack on the former intelligence operative—-said, “India is against the use of chemical weapons anywhere, at any time, by anybody, under any circumstances.”

They added, “We hope that this issue is resolved in accordance with the provisions of the Chemical Weapons Convention so as to reach evidence based conclusions. India, as all other countries, awaits the outcome of the investigation.”

Syria is another issue on which ties between the West and Russia have sharply deteriorated after reports of a Chemical attack in Syria which is being blamed on the ruling Assad regime there by the West. India on Thursday condemned “any use of chemical weapons anywhere” but was careful in its reaction to not annoy Moscow which is the main backer of the Assad regime.