The PM emphasised the need for new technologies like artificial intelligence (AI) and robotics. 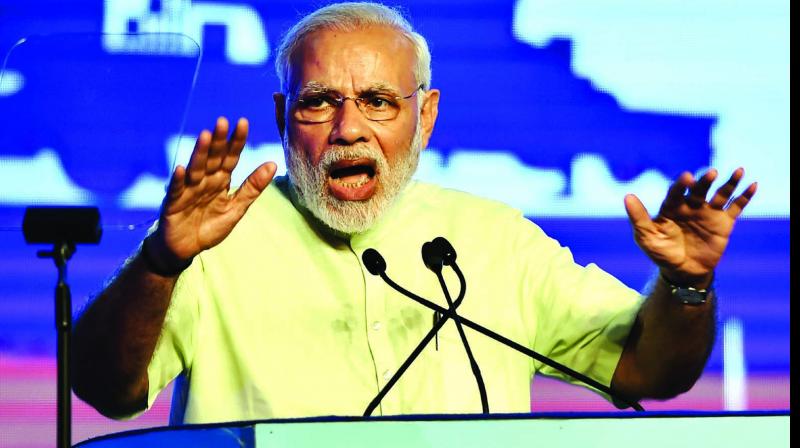 Prime Minister Narendra Modi speaks during the inauguration of the 10th edition of India’s mega defence exhibition “DefExpo 2018” at Tiruvidandhai, on the outskirts of Chennai. (Photo: PTI)

Chennai: Prime Minister Narendra Modi on Thursday lashed out at the previous UPA government for its “policy paralysis” and “inordinately” delaying defence procurement, and assured foreign companies that it would no longer take a decade or so to take decisions on buying fighter jets and other military purchases.

Formally inaugurating IDEX (Innovation for Defence Excellence) on the sidelines of DefExpo 2018 at Tamil Nadu’s Thiruvidanthai, near Chennai, Mr Modi added that the country had seen the damage caused by the “laziness, incompetence or perhaps some hidden amotives” of the previous government. He reiterated that his government had resolved the issues that had not been addressed by previous governments, and added: “The country has seen how providing bulletproof jackets to Indian Army soldiers was kept hanging for years.”

Explaining to national and international delegations the bold actions taken to meet the immediate critical requirements of the country, the PM said the present government had initiated a new process to procure 110 fighter aircraft. “You will recall the long-drawn process of procurement of fighter aircraft that never reached any conclusion. We have not only taken bold action to meet our immediate critical requirements, but have also initiated a new process to procure 110 fighter aircraft. We do not want to spend 10 years in discussions without any tangible outcomes,” he said.

Speaking about “Innovation for Defence Excellence”, Mr Modi promised that the move would help set up defence innovation hubs throughout the country to give necessary incubation and infrastructure support for startups. “Private venture capital in the defence sector, specially for startups, will be encouraged,” he said.

“We will work with you with a sense of mission to keep our defence forces equipped with state-of-the-art systems, and to create the necessary domestic manufacturing ecosystem to achieve this. And, in all our efforts to pursue efficiency and effectiveness in partnership with you, we will be guided by the highest ideals of integrity and probity,” he said.

The PM emphasised the need for new technologies like artificial intelligence (AI) and robotics. “Artificial intelligence and robotics are the most important determinants of defensive and offensive capabilities for any defence force in the future. India, with its leadership in the information technology domain, will strive to use this technology tilt to its advantage,” he predicted.

The government was committed to building a defence industrial complex, which would inclde the public and private sectors as well as foreign firms. “Two defence corridors (one in Tamil Nadu, the other in Uttar Pradesh) will increase economic development and the growth of the defence industrial base. We have also established a Defence Investors Cell to assist and hand-hold investors involved in defence production,” he said.

Lauding the small and medium sector’s contribution to defence production, Mr Modi said that defence production by SMEs has grown by 200 per cent in the past four years. “Procurement from SMEs by defence public sector undertakings and ordnance factories has gone up from about `3,300 crores in 2014-15 to over `4,250 crores in 2016-17. This is an increase of close to 30 per cent,” he pointed out.

“Regulations, processes and procedures have been made more industry-friendly, more transparent, more predictable and more outcome-oriented. We have removed many entry barriers for industry, especially for the small and medium enterprises.” He added that the initial validity of industrial licences had been increased from three years to 15 years, with provision to further extend it by three years.