Sarvana Suresh, 50, told family members he was going out for walk, and then in a market, doused himself in kerosene and set himself ablaze. 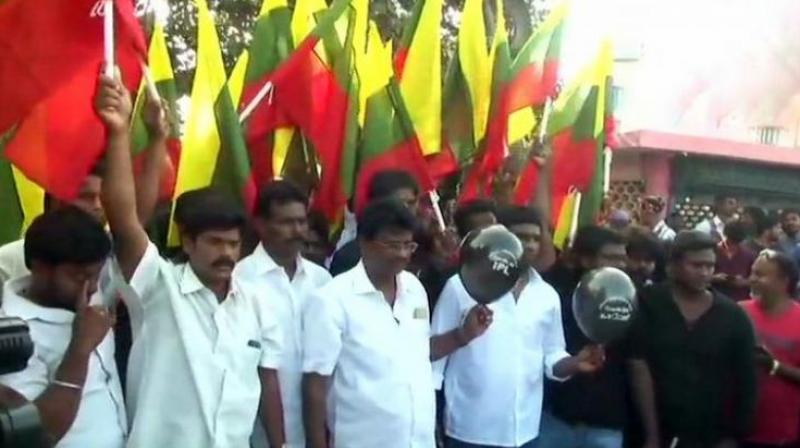 Protests over non-formation of the Cauvery Management Board continues unabated in Tamil Nadu, (Photo: File/ANI)

Chennai: As the protests over non-formation of the Cauvery Management Board (CMB) continues unabated in Tamil Nadu, a relative of MDMK chief Vaiko attempted self immolation on Friday.

According to Hindustan Times, Sarvana Suresh, 50, a nephew of Vaiko and resident of Virudhunagar, told family members he was going out for a walk, and then in a market, doused himself in kerosene and set himself ablaze.

People nearby rushed to him and tried to put out the flames before taking him to Apollo Hospital in Madurai. He suffered 80 per cent burn injuries, the report said.

Police are investigating the incident.

Vaiko in a statement said that Suresh was distraught over the developments on Cauvery and had set himself ablaze. “I have lost hope of his survival. All in my family are suffering as if struck by a thunderbolt,” he said.

The MDMK chief also appealed to people not to take their own lives.

In Chennai, farmers associations held peaceful demonstration near Chepauk stadium where a few speakers said they would stop paying taxes as neither the Centre nor the state government appeared to be coming to their rescue.

The protest pertains to the non-formation of the CMB over sharing of the river’s water between Karnataka and Tamil Nadu.

The Supreme Court had in its February 16 verdict asked the Centre to set up the CMB within six weeks, but the deadline lapsed on March 29, with the Centre failing to set up the board and seeking three months time to do so.

Tamil Nadu political leaders have alleged that the BJP-led Centre was acting in favour of Karnataka, which is opposed to the CMB and where assembly elections are due next month.