Only 576 voters of the total 34,169 cast their votes across all polling stations till 2 pm. 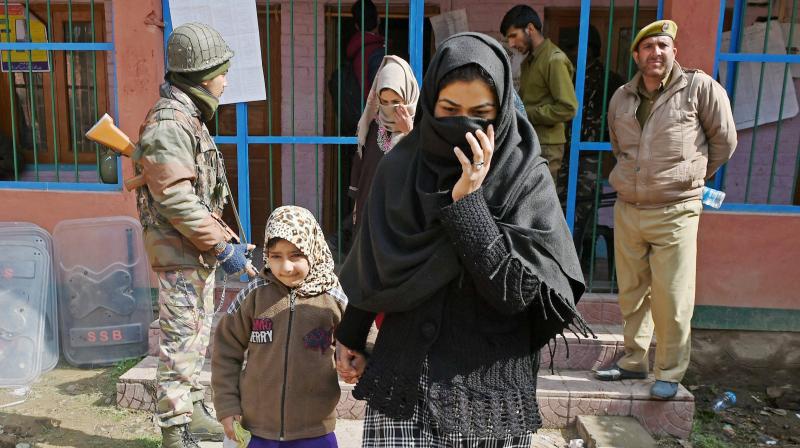 Women coming out from a polling station after casting their vote for Srinagar Parliamentary constituency of Jammu and Kashmir at Budgam. (Photo: PTI/File)

Srinagar: Only 1.68 per cent voters cast their franchise till 2 pm at 38 polling stations of Srinagar Lok Sabha constituency where repolling was ordered by the EC following violence during Sunday's polls for the prestigious seat.

Only 576 voters of the total 34,169 cast their votes across all polling stations till 2 pm, officials said in Srinagar.

While no votes have been polled in Khansahib Assembly segment so far, only three votes were cast in Budgam segment and 27 votes in Chrar-e-Sharief segment, the officials said,

They said Beerwah segment recorded 293 votes and Chadoora saw 253 people cast their votes during the corresponding period. The voting began at 7 am and will end at 4 PM.

Barring a stone pelting incident at Soibagh area in Budgam district, the situation in the poll bound areas has been peaceful so far, the officials said.

Miscreants pelted stones at polling station at Soibagh but they were chased away by the security forces, they said.

There was an altercation between opposition National Congress and ruling PDP workers at Badran in Beerwah area over allegations of bogus voting, the officials said, adding that the issue was later resolved with the intervention of the polling staff and security personnel posted on duty there.

Eight people were killed in firing by security forces as unprecedented election-day violence marred the bypoll for Srinagar Lok Sabha seat which saw the voter turnout plunge to an all-time low of 7.14 per cent.

Rampaging mobs took to streets in scores of places across the Lok Sabha constituency straddling Srinagar, Budgam and Ganderbal districts, perpetrating wanton violence and arson, even setting ablaze a polling station and attempting to set on fire two others, amid a boycott called by the separatists.