Mann said the swearing-in ceremony will be held at 12:30 pm on March 16 at Khatkar Kalan, the ancestral village Bhagat Sing 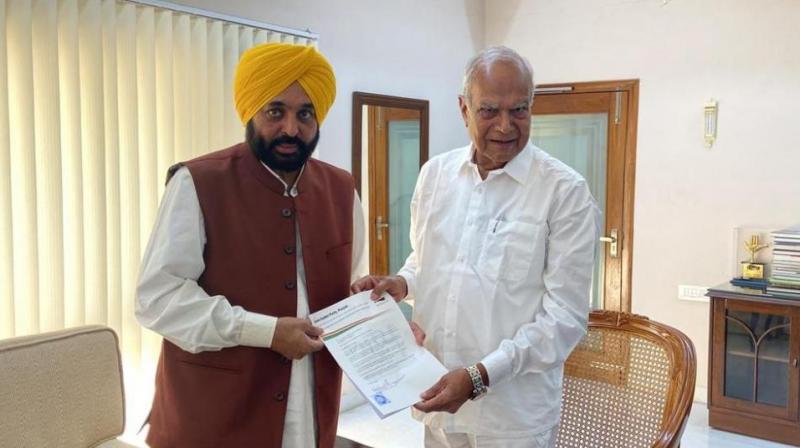 New Delhi: Aam Aadmi Party’s Bhagwant Singh Mann on Saturday met the Governor of Punjab, Banwarilal Purohit, to stake claim for government formation in the state. But before taking charge he has already begun work. Mann has ordered the withdrawal of security from 122 former ministers and ex MLA in the state belonging to Congress and Akali Dal saying police is needed to secure people not VIPs. However, security of the Badal family, and former CMs like Captain Amarinder Singh and Charanjit Singh Channi have not been removed given high threat to them.

"On one hand, police stations are lying vacant, while on the other, security has been given to the leaders by setting up tents in front of their houses. We will take the load off the police. The safety of three and a half crore people is more important. We will take only police work from police force,” Mann said.

Mann, who is set to take oath on March 16, said the entire Punjab is invited in his swearing in. “I met the Governor and handed over a letter of support from our MLAs and staked a claim to form the government. He told me to tell him wherever we want to hold the swearing-in ceremony. It will be held at the native village of Bhagat Singh, Khatkar Kalan at 12.30 pm on March 16… We will have a good cabinet, historic decisions -that were never made before - will be made. So, you will have to wait,” said Mann after meeting the Governor. He added people from across Punjab will come to the ceremony and also pay tribute to Bhagat Singh.