Fisherman was shot dead on March 6 allegedly by the Lankan Navy personnel while fishing in a mechanised boat off Katchatheevu islet. 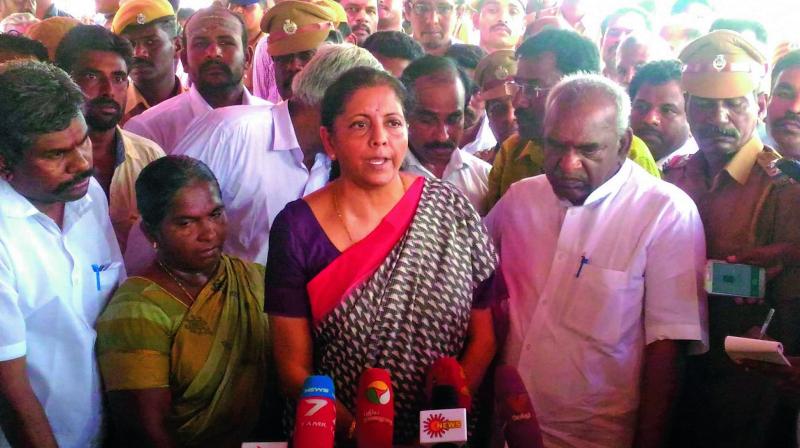 Union minister of state for commerce and industry Nirmala Sitharaman, along with MoS for road transport, highways and shipping P. Radhakrishnan, addresses the media at Thangachimadam in Rameswaram on Sunday after a meeting with the fishermen community, which has been protesting the alleged killing of 22-year-old fisherman by the Sri Lankan Navy. (Photo: PTI)

Rameswaram: Fishermen agitating over the killing of a colleague allegedly by the Sri Lankan Navy decided to withdraw their six-day protest on Monday after talks with Union ministers Nirmala Sitharaman and Pon Radhakrishnan here on Sunday.

The breakthrough came after talks between a delegation of fishermen leaders led by Struggle Committee president Arualanandam and the two ministers at a hotel here.

Mr Arulanandam said the ministers have assured that the fishermen’s demands would be met following which they decided to call off their agitation by Monday after the funeral of the slain fisherman Bridgo.

The fisherman was shot dead on March 6 allegedly by the Lankan Navy personnel while fishing in a mechanised boat off Katchatheevu islet.

The fishermen have been on the protest since March 7, refusing to receive the body of the youth unless a Central minister visits the island and gives them an assurance that such incidents would not recur.

Earlier in the day, commerce minister Ms Sitharaman accompanied by Mr Radhakrishnan, senior BJP leader from the state, visited the fishermen at nearby Thanga-chimadam and appealed to them and the mother of 22-year-old Bridgo to end the agitation and arrange for his burial.

Later, she held talks with the fishermen leaders. Ramanthapuram district collector S. Natarajan and other officials were present.

Mr Natarajan told reporters that the fishermen have agreed to withdraw the agitation on Monday after the funeral of Bridgo.

Another fishermen leader P. Sesuraja said the community had already given a call for a one-day fast on Monday. After the fast, the funeral would be held and the agitation would be withdrawn, he added.