Shah meets Rajnath on UP CM; MLAs to decide in Lucknow Thurs. 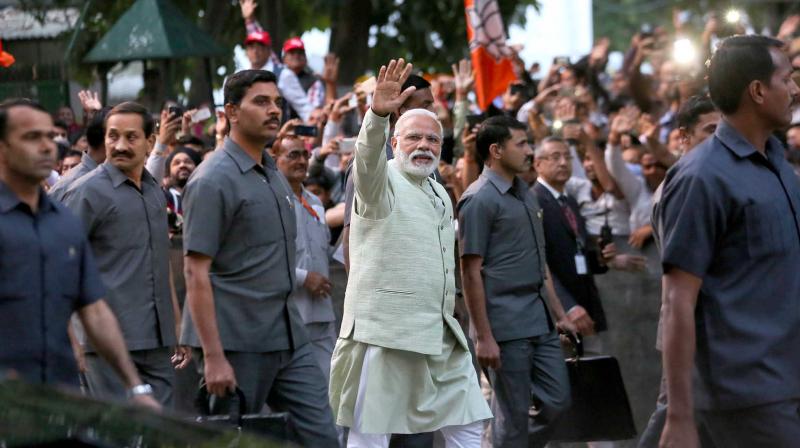 Prime Minister Narendra Modi waves to the party faithful as he walks down New Delhi’s Ashoka Road on his way to the BJP headquarters. (Photo: AP)

New Delhi: In his first address to the BJP cadre and supporters after the party’s stupendous performance in the just-concluded Assembly elections in five states, in particular Uttar Pradesh and Uttarakhand, Prime Minister Narendra Modi on Sunday asserted that power is “not an instrument to rule, but a tool of service to people”. Accused by his opponents of trying to polarise elections on communal lines, Mr Modi pledged that the BJP-led government will take everybody along as “in democracy, governments are formed with a majority, but run with consensus”. At the BJP headquarters, Mr Modi pitched for building a “new India” by 2022 that would make the nation’s founding fathers proud, and said he saw the results, particularly in UP, as the “foundation of the new India”. India will celebrate the 75th year of Independence in 2022. Mr Modi also said these elections must be evaluated as the people voted heavily despite the absence of any emotional issue, and the voted for development. With the Modi government laying stress on “garib kalyan” plans, Mr Modi said poor people now needed an opportunity to prove himself/herself, not charity.

BJP chief Amit Shah described the results as “greater” than that in the 2014 general election and predicted that the party “will get a bigger mandate” in the 2019 Lok Sabha polls. Mr Shah also predicted that his party’s victory march would continue in the coming elections in Himachal Pradesh, Karnataka and Gujarat, as well in the eastern and southern parts of the country.

Hundreds of party workers and supporters had gathered at the BJP headquarters. Greeted by party workers and supporters, Mr Modi got down from his car and walked all the way from the Le Meridien Hotel roundabout to the party headquarters at 11 Ashoka Road. Mr Modi also attended the BJP parliamentary board meeting, which appointed central observers for four states to oversee the legislature party meetings. While Union minister M. Venkaiah Naidu and general secretary Bhupendra Yadav are the observers for UP, Union minister Narendra Singh Tomar and general secretary Saroj Pandey will officiate in Uttarakhand. Union minister Nitin Gadkari is the central observer for Goa while Union minister Piyush Goyal and vice-president Vinay Sahasrabuddhe are on duty in Manipur. In UP, the legislature party meeting is likely to be held on March 16, when the party MLAs will decide their leader and chief minister. The parliamentary board also authorised Mr Shah to decide CM nominees in the four states in consultation with the party observers of the respective states.

A multi-layered security cover was put in place at Ashoka Road with hundreds of Delhi Police, CISF and BSF personnel as well as NSG commandos deployed there. Surrounded by security personnel, Mr Modi waved at supporters during his “victory walk” amid the shower of petals and chants of “Modi, Modi”.

“I see this victory as the foundation of a new India where 65 per cent of the population will be young people below 35... A new India of unprecedentedly vigilant women... A new India where the poor don’t want anything by way of charity, but seek an opportunity to chart out their own course. I see this change happening,” Mr Modi said, amid chants of “Har Har Modi! Ghar Ghar Modi!”

Earlier in the day, the PM tweeted: “India is emerging, which is being powered by the strength and skills of 125 crore Indians. This India stands for development.”

In a statement on his website narendramodi.in, the PM said: “India is transforming, powered by the strength of each and every citizen of India... An India that is driven by innovation, hard work and creativity; an India characterised by peace, unity and brotherhood; and an India free from corruption, terrorism, black money and dirt.”

Stressing on the development agenda, Mr Modi said this was one issue that most political parties shy from taking up as a poll plank, unlike emotional issues. He said there was a lack of emotive issues in these polls but still the turnout was huge for a campaign based on development, which shows the transition that is happening towards the creation of a new India. He said the unexpected turnout and mandate was forcing political pundits to “rethink”. Referring to generations of Jan Sangh and BJP leaders like Atal Behari Vajpayee, Lal Krishna Advani, Kushabhau Thakre and Jana Krishnamrrthi who “gave their youth and life” for raising “this banyan tree”, Mr Modi said power was “not an instrument to rule, but a tool of service for the people”.

Mr Shah said the BJP’s victory in UP in particular was an endorsement of the BJP-led NDA government’s pro-poor policies. He said the people had expressed complete faith in Mr Modi’s leadership. Senior leaders including Cabinet ministers like Rajnath Singh, Arun Jaitley, M. Venkaiah Naidu and Ananth Kumar, who are also parliamentary board members, were present on the dais. Mr Shah attributed the party’s victory to demonetisation and said that with it the poor had come closer to the Narendra Modi government.

Mr Shah, meanwhile, held a meeting with Mr Rajnath Singh separately in the afternoon. Speculation is rife that both discussed the probable candidates for the UP CM’s post. Mr Shah also met RSS leader Krishna Gopal late on Saturday night on the CM issue. The names that have been doing the rounds are state unit chief Keshav Prasad Maurya, Lucknow mayor Dinesh Sharma, Shahjahanpur MLA Suresh Khanna, and Union ministers Manoj Sinha and Uma Bharti. Mr Rajnath Singh’s name is also doing the rounds for the chief ministership. He is, incidentally, a former CM of the state.

In Uttarakhand, Satpal Maharaj and Trivendra Rawat are among the names doing the rounds for the CM’s post.