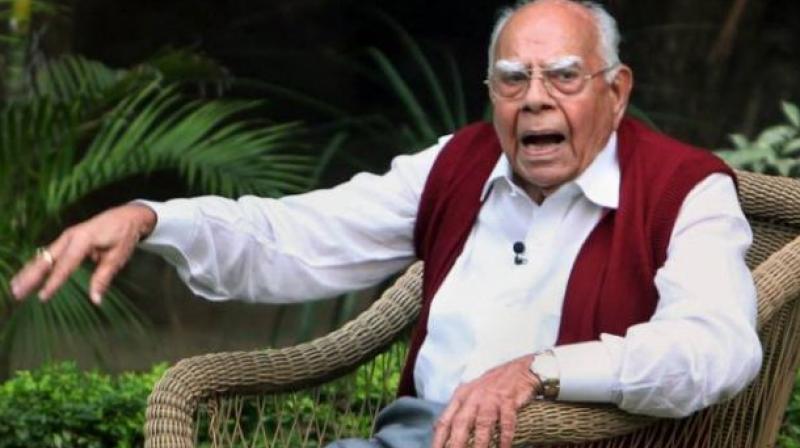 New Delhi: Senior lawyer Ram Jethmalani has come down heavily on Justice CS Karnan of the Calcutta High Court for his remarks against the judiciary and advised him to "withdraw every word that you have uttered".

In an open letter to Justice Karnan against whom the Supreme Court has issued a bailable warrant to ensure his presence before it on March 31 in a contempt case, Jethmalani said, "In this corruption-dominated country, our judiciary is the only protection. Do not destroy it or even weaken it."

A defiant Justice Karnan had said he would not attend the contempt proceedings on March 31 calling the issue of bailable warrant as "unconstitutional", and alleged he was being targeted for being a Dalit.

Dismissing Justice Karnan's contention, Jethmalani said, "As a lawyer I have worked all my life for the backward classes and I have great concern and sympathy for them. But you are out to cause the greatest damage to their interests."

A seven-judge Constitution bench headed by Chief Justice JS Khehar had on March 10 taken strong note of Justice Karnan's non-appearance despite being served with a contempt notice and asked the Director General of West Bengal Police to execute the warrants on the judge to ensure his presence at 10:30 am on March 31.

Justice Karnan goes down in the Indian judicial history as the first serving High Court judge against whom an arrest warrant has been issued by the apex court in a contempt case.