The first half of the forum featured top tourism professionals, who spoke about the importance of films, to promote destinations. 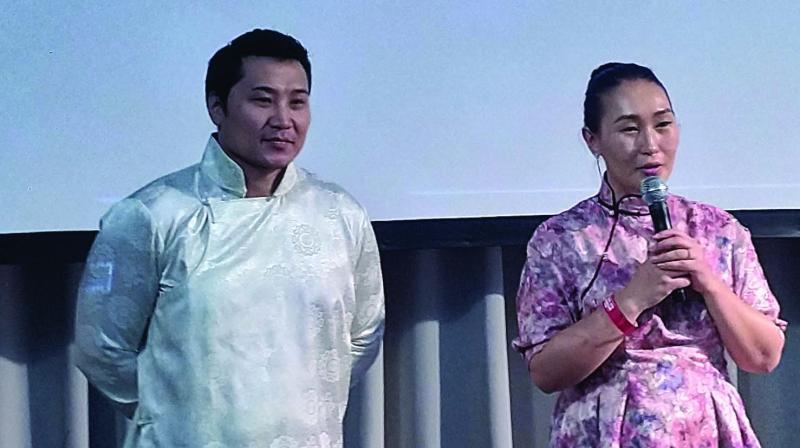 Director of Mongolian film, The Steed, and director-general of Mongolian tourism Bayasgalan Saranjav at the forum.

A unique and intensive Asia Destination Film Forum was held in Bangkok, a one-day event which covered a wide array of fields — business, tourism, sustainability,
cinema.

The first half of the forum featured top tourism professionals, who spoke about the importance of films, to promote destinations. Tanes Petsuwan, deputy governor, marketing communications, Tourism Authority of Thailand (TAT), spoke of the many Hollywood movies that had put Thailand on the international tourist map — James Bond 007, Bridge on the River Kwai, The Railway Man. He admitted that the many Bollywood movies shot in Thailand also helped to popularise the destination and bring huge numbers of Indian tourists to Thailand. That’s why he said that TAT used a lot of   visual media campaigns for their marketing initiatives.

Deepak Ohri, the Indian CEO of Bangkok’s top Leboa Hotel, spoke of the marketing campaigns his hotel did with the producers of the Hollywood film Hangman 2, when that film was shot in his hotel. He informed that the Hangman Suite, Hangman Tours, even a martini drink called the Hangman-Tini became very popular tourist-draws.

In fact, former Thai tourism minister Weersak Kowsurat suggested at the forum, that may be a film visa could be issued, for the many foreign film units shooting in Thailand!

Joe Choo, of the Singapore Tourism Board, informed how the movie Crazy, Rich Asians had given a huge boost to tourism in the  country, which led them to create unique tourism programmes, like Crazy Rich Asian Tours
and so on.

Cambodia-based Australian producer Nick Ray, stated that the Angkor Wat temples in Cambodia, had opened out to the world only after Angela Jolie’s film Tomb Raider was shot there, in 2000. Since then, the production house Hanuman Films owned by him and his well-known Cambodian filmmaker wife Kulikar Sotho, had been involved with many foreign film productions in Cambodia. Their own film The Last Reel, had taken them to festivals around the world, including Goa in India.

Meanwhile Dr Shean Chadwell and Gabriel Kuperman, of the Luang Prabang Film Festival in Laos, informed how the open-air film festival had helped to hugely promote the destination, drawing as many as 20,00 people, every year, including tourists.

One also heard of the huge boost given to tourism in Vietnam, by the Hollywood film King Kong.

The negative aspects of tourism were  pointed out too, caused by an over-kill of film shootings, and consequent over-kill of tourists. Particular mention was made of  once-pristine destinations like Maya Beach in Thailand (which has now closed down) and Halong Bay in Vietnam,

That’s why “sustainability” was an important theme of the forum.

At a panel discussion on the subject, Janet Salem of the United Nations Environment Programme (UNEP) spoke with pride about their ‘Sustainability’ film on  the wonderful Palawan island in the Philippines,which had bagged many awards, and more importantly, had reached out to audiences around the world.

Graham Harper of PATA, stated that it would be good for tourism professionals to consult film-makers, when making movies about sustainability.

The forum had an interesting interaction with video bloggers who spoke about the wide reach of their blogs across the world.

Meanwhile, the country in focus at the forum, was Mongolia, about which one knew little, until one heard the presentations of Mongolian minister for environment and  tourism Tserenbat Namsrai and their director general of tourism Bayasgalan Saranjav.

Both said that Indian films were very popular in Mongolia (they both hummed the song, “Jimmy, Jimmy, Jimmy”, from the Bollywood film, Disco Dancer) and stated that they would gladly welcome and support Indian film-shootings in Mongolia.

Judging by the stunning landscapes of the Mongolian film The Steed, which was screened at the Forum, one certainly hopes they would form the locales of   Bollywood films in the future.

Talking about India as a location for films and TV serials, Nicholas Simon of  Indo China Productions, confessed that it was a nightmare getting permissions to shoot in India, He informed that American-Indian actor Dev Patel was very keen to make a film in India, but they had not made any headway for this.

The lone Indian travel agent at the forum, was  Uttara Sarkar Crees. based in China, who was pleased by the increasing number of  Indian tourists to China (though all that has probably stopped, with the Coronavirus!)

The afternoon session of the forum featured talk-sessions with filmmakers.

Among these, was noted Thai director Ekachai Uekrongtham, whose film Stranded was the first original production from Thailand for Netflix. He stated that they had combed eight provinces to get the “right forest”, which was almost a character in the film. He was proud that the film drew attention to the many wonders of Thailand’s natural landscapes.

Meanwhile Tom Waller, the Thai-Irish director of the much-talked-about film The Cave( based on the Thai football team who were stranded in the Thamluang caves of Chiangrai, which incidentally, have now become a big tourist attraction), and a line-producer  in his own right, who had coordinated the shooting of many mega Hollywood movies in Thailand, suggested that Thailand should have a Commission, like the Korean Film Council, to give more support to foreign film-makers shooting movies in the country.

An important remark, considering that Korea is a top Oscar-winning country today!

The highlight of the Asian Film Destination Forum, was choosing the winners of the Mekong Mini Films Competition, on the Mekong region (one minute each), and the Asian Film Destination Awards (short films of about 20 minutes). The former entries were submitted by tourists and the general public, the latter by tourism bodies, professionals, public.

What was impressive to note, was that both competitions got numerous entries — about 500 for the first, and 1,000, for the second.

Ten films were short-listed, and the winners were chosen by public voting. Among the awardwinning films, was one on the Incredible India campaign by the Indian Tourism Ministry, and another by content creator Ric Gazarian, whose film Hit the Road portrayed his road-journey of more than 2,000 km around India by autorickshaw! A Public Choice award went to Abhimanyu Kukreja, for the film Ruckumentary, about the evolution of rock music in India.

Some of these films would be screened at the mega  ITB  Berlin, on 4 March, and at the Mekong Tourism Forum in Bagan, Myanmar, on 28-29 April.

According to Jens Thraenhart, founder of the Asia Destination Film Forum and Executive Director of the Mekong Tourism Coordinating Office, the whole purpose of the forum was to portray “The impact of visual story-telling, be it through feature films or online content, in improving tourism. Destinations can inspire travelers to explore new experiences, through films and human impact stories.” Another important aim of the Forum, he said, was to point out the  “challenges” faced by both the film-makers and the destinations, to maintain sustainability in the environment. Well-said and portrayed, indeed, at this holistic one-day forum.