India   All India  13 Feb 2019  Will fight along with Congress, Left in LS polls: Mamata Banerjee at Delhi rally
India, All India

Will fight along with Congress, Left in LS polls: Mamata Banerjee at Delhi rally

WB CM said Oppn parties will fight unitedly and that she was ready to sacrifice her life and party for country. 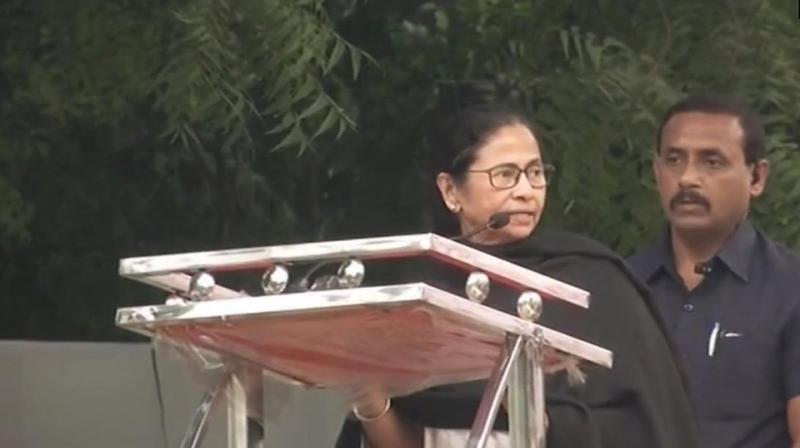 She also reiterated that Prime Minister Narendra Modi’s days are over and dared him to arrest her. (Photo: ANI | Twitter)

New Delhi: West Bengal Chief Minister and Trinamool Congress supremo on Wednesday declared that she would fight alongside the Congress and the Left to take on Prime Minister Narendra Modi for the upcoming general elections, regardless of her rivalry with them in Bengal.

"We will fight together with the Congress and the Left at the national level... we will fight in the state but not nationally," Banerjee said, talking about collaborating with the Left for the first time ever.

Banerjee said, “Democracy has become ‘Namocracy’ and the situation in the country is worse than what it was under the emergency,”

She also reiterated that Prime Minister Narendra Modi’s days are over and dared him to arrest her.

“Today is the last day of Parliament; Modi’s expiry date is over. It is only a matter of days, jo darte hain woh marte hain; joh larte hain woh jeet tey hain (Those are scared, perish, those who fight, win), They can’t scare us for long. What will Modi do? Send me to jail, set agencies against us or murder us? We are not the ones to be afraid,” she said at the ‘Tanashahi Hatao, Desh Bachao’ (Remove Dictatorship, Save Country) rally in Delh’s Jantar Mantar hosted by the Aam Admi party (AAP).

She said Opposition parties will fight unitedly at national level and that she was ready to sacrifice her life and party for the country.

On Wednesday, TMC faced attack from senior state Congress leader Adhir Chowdhury over the Saradha Ponzi scheme, over which several of Banerjee’s party leaders had been arrested. Banerjee is known to share a good equation with the UPA chairperson. But on Wednesday, when they met at Parliament's Central Hall, the upset Chief Minister said, "We will remember".  "We are accusing each other but we are friends," Sonia Gandhi had said.

Banerjee's announcement is part of the opposition's efforts to put behind their differences and come together for a common cause.

Last year, Andhra Chief Minister Chandrababu Naidu, turned his back to three decades of political rivalry and reached out to the Congress. Naidu, in various media interviews admitted that it was a political compulsion.

Although there has been no big announcement, Congress and Kejriwal’s Aam Aadmi Party, whose differences are well known, are also trying to work together.