Banerjee said, 'Every party has its own ideology. We believe in patriotism. I have come to Parl to pray in front of Gandhi statue.' 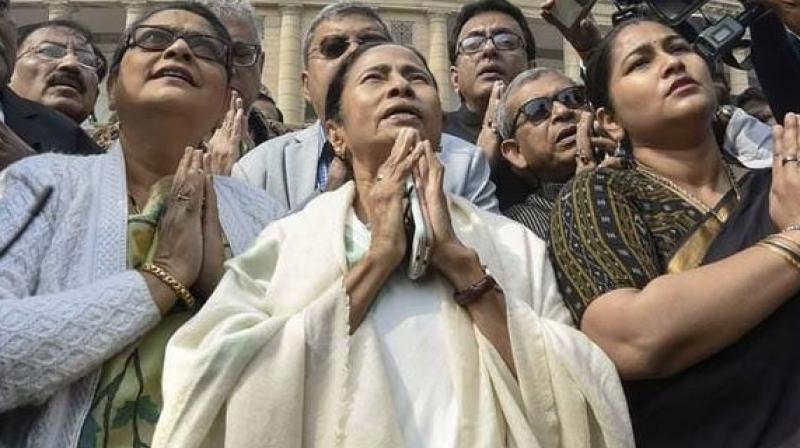 Mamata Banerjee prays in front of the Mahatma Gandhi's statue at the Parliament House. (Photo: PTI)

On the last day of 16th Lok Sabha, Trinamool Congress chief Banerjee said, "Every political party has its own ideology. We believe in patriotism. I have come to Parliament to pray in front of Mahatma Gandhi statue. We prayed to remove BJP and Narendra Modi and save the country and its unity."

The West Bengal CM has been very vocal against the BJP government at the Centre. She along with her Andhra Pradesh counterpart N Chandrababu Naidu and several other regional leaders are trying to form a grand alliance of regional parties to fight against BJP in the 2019 Lok Sabha elections.

A few days ago, a full-blown face-off between the Mamata Banerjee government in West Bengal and the Centre erupted after a CBI team attempted to arrest Kolkata Police Commissioner Rajeev Kumar for his alleged connection in the Saradha chit fund case. However, CBI officials were unceremoniously denied entry to the cop's residence and detained.

Escalating her confrontation with the Centre, Banerjee started a sit-in on the night of February 3 to protest, in what her Trinamool Congress party called a "coup" by the PM Modi government. However, Banerjee ended her fast on February 5.