India   All India  13 Feb 2019  India’s self-confidence at all time high, says PM Modi in his farwell speech
India, All India

India’s self-confidence at all time high, says PM Modi in his farwell speech

'We will be proud of this 16th Lok Sabha, as it saw the highest number of women members elected to the House,' PM said. 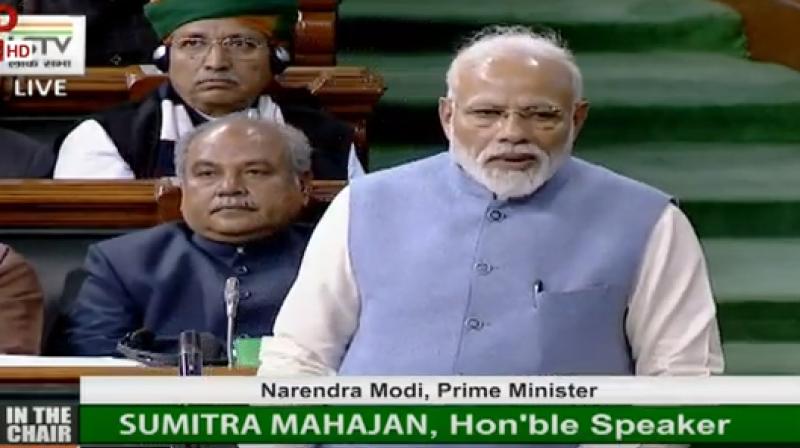 PM Modi said that world today is discussing the issue of global warming and India has made an effort for the formation of the International Solar Alliance to combat this problem. (Photo: ANI | Twitter)

New Delhi: Addressing the Lok Sabha on Wednesday for the last time before the general elections, Prime Minister Narendra Modi said the country’s self-confidence is at an all time high and it is a very good sign because such confidence gives boost to development. He also said that India has become 6th largest economy ad is close to becoming USD 5 trillion economy .

Continuing his address, PM Modi said that world today is discussing the issue of global warming and India has made an effort for the formation of the International Solar Alliance to combat this problem.

“This House passed the laws to fight the menace of black money and corruption. This House also passed the GST bill. The GST process revealed the spirit of cooperation and bipartisanship,” PM said while appreciating the efforts of the members of the House.

PM said that during the tenure of his government, as many as 219 bills were placed in Parliament, of which 203 were passed.

Modi said that MPs were accused of deciding their own salaries and now that there is a system where their salaries increase whenever others’ salaries increase. This Lok Sabha has freed MPs from that responsibility, he added.

"First time I learnt about mistakes by the eyes (aankhonki gustakiyan) that happens here," he added.

The Prime Minister targeted the Congress over its attack on the government on the Rafale fighter jet deal and said “many planes were being flown in the floor of this House”.

PM Modi maintained his attack to target Rahul Gandhi and said “there was talk of an earthquake but he never came”.

Rahul Gandhi had alleged that he was not allowed to speak in Parliament by the government and there “will be an earthquake” if he gets a chance to speak.