India   All India  13 Feb 2018  Rahul must expel Aiyar from Cong for his Pak remark: Cong leader
India, All India

Rahul must expel Aiyar from Cong for his Pak remark: Cong leader

In a latest, Aiyar said that Pak wants cordial relations with India, but India is 'still caught in a partially 1947 situation'. 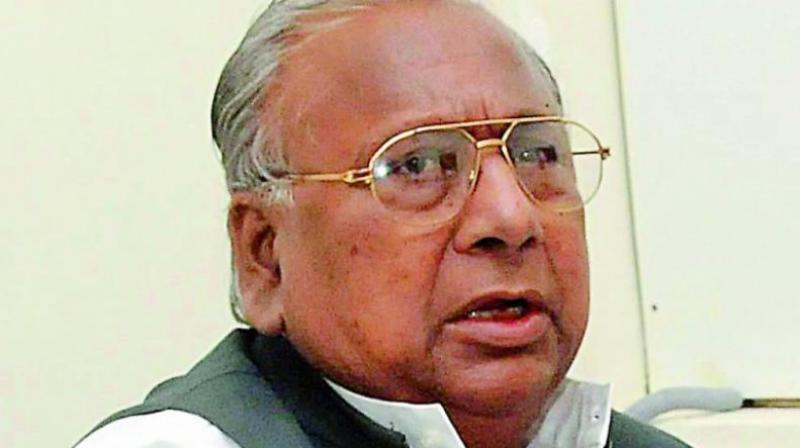 New Delhi: Senior Congress leader and former MP, Hanumantha Rao has said that he will write to party chief Rahul Gandhi requesting him to expel Mani Shankar Aiyar for saying that while most political parties in Pakistan want cordial relations with India, those in India are "still caught in a partially 1947 situation".

Aiyar, who was suspended by the Congress in 2017 after his "neech" remark against Prime Minister Narendra Modi, made the latest comment in Karachi.

"All political parties except the Jamaat-e-Islami say they want peace with India. Now this change in mindset that is taking place in Pakistan is not reflected in India," Aiyar said.

The comment by Aiyar was well-timed as it came two days after Pakistan-based Jaish-e-Mohammed terrorists attacked an Army camp in Jammu, killing five soldiers, one civilian and injured 10 people, including women and children.

Defence Minister Nirmala Sitharaman, on Monday, warned that "Pakistan will pay for its misadventures".

"Mani Shankar Aiyar should stop giving such remarks, he has already been suspended. He should stay quiet," Hanumantha Rao told news agency ANI, adding, "I am writing to Rahul Gandhiji asking him to expel Aiyar from the party."

Rao termed Aiyar’s remarks as “weird” and said that it may damage the Congress’ prospects in upcoming polls in Karnataka.

"The BJP can take advantage of this," Rao fumed, also stating, "He has earlier given such kind of a wrong statement during the Gujarat election campaign and we have suffered a lot because of that. Later Congress President Rahul Gandhiji even suspended him but still he said that I have got lot of love and affection from Pakistan. What nonsense is he really talking about?"

BJP's Sambit Patra said Aiyar is a “repeat offender”, pointing out that "we have seen him in the past also going to Pakistan and saying ‘Modi ko hatana hoga’.”

Soon after getting criticism from Congress and BJP, Mani Shankar Aiyar, who is in Pakistan, told ANI, “Thousands of people, whom I don't know, hug me, wish me. I receive much more hatred in India than the love I receive in Pakistan. So I am happy to be here. They are clapping for me because I speak of peace.”

Patra added that Aiyar was not the only Congress leader to do this.

"We have also seen Salman Khurshid going in the past to Pakistan and praising Pakistan and demeaning India. Such is the culture of the leaders of the Congress party, where P Chidambaram speaks about ‘azaadi’ (independence), in the sense that it means autonomy... where they, in fact, speak against the Indian Army, saying that Indian Army chief is like 'sadak ke goonde' (road-side goons)," Patra said.

Just ahead of the Gujarat Assembly elections in December 2017, Aiyar had called Prime Minister Narendra Modi a “neech aadmi”, a comment that earned him a reprimand and a suspension order from Rahul Gandhi.

Modi during his election campaign in Gujarat said Aiyar had not only insulted him but his entire home state of Gujarat and urged voters to punish the Congress.

The Congress posted its best performance in Gujarat in years, narrowing the margin, but it was the BJP that won the state for the fifth time in a row.

The remark against Modi before the Gujarat polls was not for the first time, ahead of the 2014 general election Mani Shankar Aiyar had derided Modi as a tea seller who could never be Prime Minister.