After an overnight lull, encounter between security forces and terrorists hiding in a building in Srinagar's Karan Nagar resumed on Tuesday. 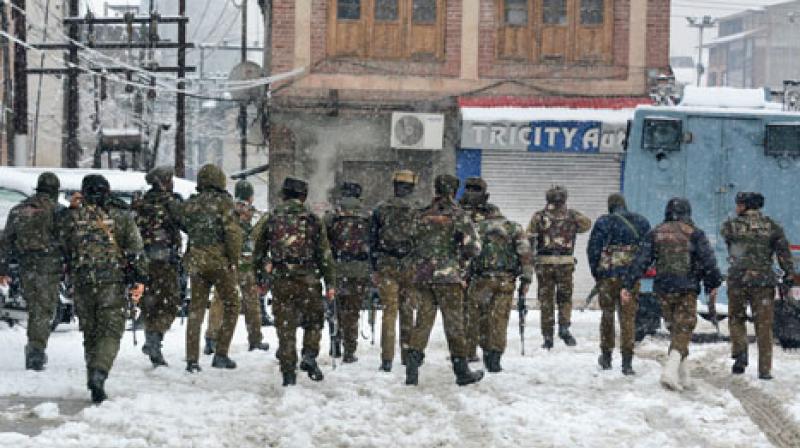 Mopping operation is underway at Srinagar's Karan Nagar after both the terrorists were gunned down on Tuesday. (Photo: PTI)

Srinagar: Both the terrorists, belonging to Pakistan based terror group Lashkar-e-Taiba (LeT), hiding in a building near CRPF camp in Srinagar's Karan Nagar were eliminated on Tuesday, officials said.

Mopping operation is underway after both the terrorists were gunned down, officials said.

After an overnight lull, the encounter between security forces and terrorists hiding in the building in Srinagar resumed on Tuesday.

A CRPF jawan was killed and a policeman was injured in the encounter that began on Monday. The CRPF has claimed it thwarted the attempt by terrorists to attack its camp in Karan Nagar area.

The incident came days after Jaish-e-Mohammad (JeM) terrorists attacked an Army camp in Sunjuwan area of Jammu, killing six people including five soldiers. Three terrorists were also killed in retaliation by the Army.

Authorities have imposed restrictions in parts of Srinagar - the summer capital of Jammu and Kashmir - to maintain law and order, a police official said.

Restrictions have been imposed in eight police station areas as a precautionary measure, the official said.