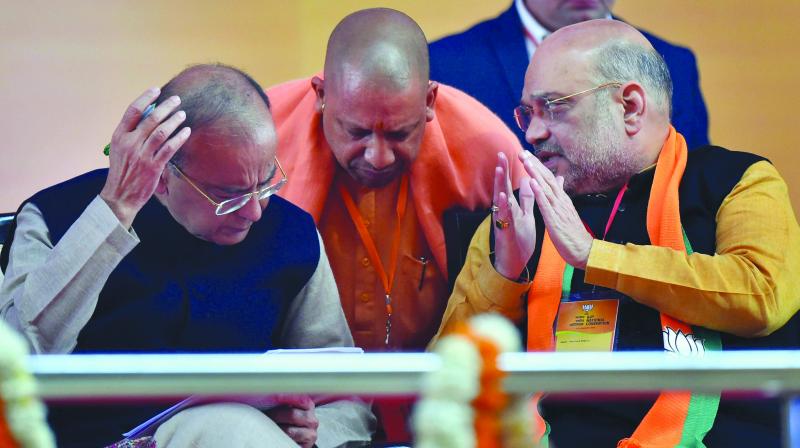 New Delhi: Asking the BJP cadre to control the narrative and set the agenda of the coming Lok Sabha polls, senior BJP leader and Union finance minister Arun Jaitley on Saturday said the Opposition camp, which has been spreading lies against the Narendra Modi-led NDA government, should be corned on the leadership issue as it is one issue that the Opposition has been running away.

On the Rafale issue, over which the Congress has been blaming the Modi government, Mr Jaitley said Mr Modi “saved money” in the deal and the Opposition's lies on the issue were defeated in Parliament. Mr Jaitley asked the cadre to aggressively highlight issues of Mr Modi's leadership, Modi government's performance and “core issues linked with the party’s ideology.”

Mr Jaitley, who was seconding the political resolution moved at the party’s national council on the concluding day, said the Opposition camp knows that it cannot stand before Mr Modi, whose stature is higher than any of its leader because of his government’s performance and his mass appeal and therefore, the Opposition camp is avoiding the leadership issue.

He also asserted that the Modi government has not made a single mistake to make its cadre feel humiliated.

Giving a ‘six-point’ winning mantra to party cadre, Mr Jaitley said lies cannot create a narrative and the opposition parties knows it very well that individually they cannot beat the performance graph of the Modi government and therefore, are trying to stack up numbers (proposed grand alliance) in an effort to take on Mr Modi.

“If the party workers decide that the political debate is on the leadership issue (between the NDA and the Opposition camp), then no power in this world can let us lose this election. Fortunately, the BJP and the NDA has a leader like Narendra Modi, against whom any leader from the Opposition camp feels scared.... they (Opposition parties) try to  avoid the issue but cannot hide their aspirations(of becoming a PM),” said Mr Jaitley as he named “Congress ka sehzada (Rahul Gandhi), Bengal ki didi (Mamata Banerjee).

Andhra Pradesh ke Babu (N Chandrababu Naidu), UP ki behanji (Mayawati), who have a desire (of becoming PM)" but have no strength to stand before the BJP led NDA's leader PM Narendra Modi.

Mr Jaitley said other than the leadership issue, performance of the Modi government should be debated as the NDA government's five years performance can be verified and has shown the world that a corruption free government can function. He said no government since 1947 has seen such a fastest growing economy in five years and the poor, who used to get only slogans earlier, got the benefits of the economic growth.

Taking on the opposition camp, Mr Jaitley said while the opposition cannot challenge the NDA's leadership and its performance, it is making efforts to stack up numbers by trying to stitch up an alliance, which is a "coalition of rivals." He said such alliances have failed in the past and it was chemistry on the ground, which favoured the NDA in 2014 and failed the predictions of political pundits

Mr Jaitley said each party worker should make sure that the organisation remained stregnthened till the booth level in order to remain connected with the masses.