The press meet called by 4 SC judges to criticize the CJI has 'shaken up the system', says Bar Council of India chairman. 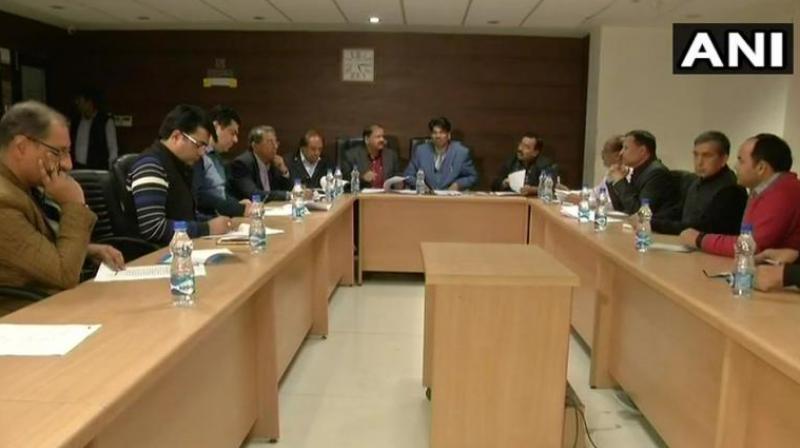 After a meeting in the evening, Mishra said that the council wants to meet the 23 other judges of the Supreme Court, followed by meetings with the four dissenting judges and finally the Chief Justice of India. (Photo: ANI)

New Delhi: Amidst indication that the Chief Justice of India Dipak Misra is likely to meet the four rebel Judges—J Chelameswar, Ranjan Gogoi, Madan B Lokur and Kurian Joseph—on Monday to settle the differences, the Bar Council of India (BCI) has formed a seven-member delegation which will attempt to resolve the issue.

Talking to the media BCI Chairperson Manan Kumar Mishra said "We have unanimously decided to form a 7-member delegation of the Council who will meet honourable judges of the Supreme Court. We want that the matter be solved at the earliest. We have got appointment from 23 judges. We want this matter to be solved earliest.”

Expressing his anguish over the turn of events, Mishra said “We have given an opportunity to Congress President Rahul Gandhi and other political parties to comment on the judiciary. This is extremely dangerous. We Request the political class to refrain from commenting on this issue. We do not want the judiciary's image to be tarnished. People have unflinching faith in the judiciary.”

On the differences in finalising the Memorandum of Procedure (MoP) relating to judges appointment, Mishra said "MoP must be finalized at the earliest. Judges have been appointed through collegium. This is not an issue that must be taken to the public. We request the judges not to give an opportunity for such an incident to occur again.”

Meanwhile sources said that the meeting of the CJI with four judges is possible only on Sunady as except justice Chelameswar, the other three judges are out of station and they are expected to return to the capital by Sunday to attend the meeting.

However, one of the four judges told this newspaper “so far nothing has been told to any one of us.”

Earlier on Saturday, the Attorney General KK Venugopal told a television channel that by Monday morning litigants and lawyers would see unity among the Supreme Court judges as a solution would be found by then. He said the matter would be settled in the larger interest of the institution.

He was of the view that the top judges are persons of wisdom, statesmanship and experience and they would not allow the issue to escalate.

In Kolkata, Justice Gogoi on the sidelines of a meeting told the media that there was no crisis. He however, refused to comment on the question whether the revolt amounted to indiscipline.

At Kochi Justice Kurian Joseph expressed confidence that the issues raised by them would be resolved.

Justice Joseph maintained that the four judges acted solely in the interest of judiciary and justice. He rejected suggestions that they had violated the disciplined and hoped that their action would bring in more transparency in the administration of Supreme Court.

An issue that has come to the attention of everyone would certainly be resolved, Justice Joseph said adding that the judges had acted only to "enhance the trust of the people in judiciary."

Meanwhile the visit of Nirupendra Mishra, Prime Minister’s Principal Secretary to the residence of CJI Dipak Misra raised speculation about the purpose of the meeting.

However, sources said he had gone to meet the CJI to wish him for New Year and also the CJI shifting to the official residence in Krishna Memon Marg but he could not meet the CJI, as the CJI was busy in his morning schedule.

Latching onto media reports that he visited the CJI’s residence, the Congress said the Prime Minister Narendra Modi must answer as to why a "special messenger" was sent to meet the CJI.

On Friday the four judges said they were forced to hold the press conference because a letter they had sent to the CJI two months ago pointing out mistakes had gone unanswered.

"We tried to persuade the CJI that certain things are not in order. Unfortunately, the efforts failed. We are convinced that unless corrective steps are taken immediately, the judiciary will lose its strong and independent tag, which is an essential hallmark of democracy”, they had said.

Later on Saturday evening, the Supreme Court Bar Association at an emergent meeting to discuss Friday's developments, unanimously passed two resolutions which they will send to the CJI.

It said the differences including on roster or MoP which are reflected in the newspapers are of grave concern and should be immediately considered by the Full Court of the Supreme Court.

The second resolution in order to restore the credibility of the institution, a system should be introduced wherein all PILs should not go beyond the first five judges of the SC collegium," said Vikas Singh, president of the Supreme Court Bar Association.

He declined to spell out the stand on Loya's death probe case.

“We feel that the situation is of grave consequences for the future of the court and must be resolved”, he added.