Protests in Tamil Nadu as SC ban on Jallikattu stays

Jallikattu, organised to celebrate Pongal, has not been held in Tamil Nadu for the last two years. 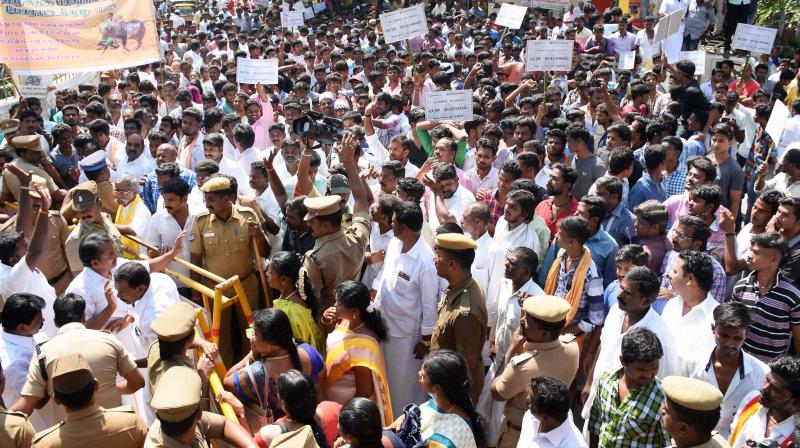 Chennai/New Delhi: Protests erupted across Tamil Nadu after the Supreme Court said on Thursday that it would not be able to give its order on Jallikattu by Saturday when Pongal starts, saying its ongoing ban on the bull-taming sport would continue for now.

After the court rejected a plea urging it to pass its order on the sport before the harvest festival, protesters took to the streets. The police had to resort to lathicharge to control the situation at several places. More than two dozen people were arrested for illegally holding Jallikattu in Cuddalore town.

About 10,000 people converged at a ground in Coimbatore in support of Jallikkattu, while protests were staged in Sivaganga, Dindigul, Pudukottai and Salem districts.

Jallikattu, organised to celebrate Pongal, has not been held in Tamil Nadu for the last two years. It was first banned in May 2014 by the apex court. In 2016 though the Centre permitted the event, the court stepped in and stayed it. Animal rights groups oppose the sport on the grounds of cruelty to animals.

The court said it was hearing petitions challenging the Centre’s notification allowing the sport, and added a draft judgment was ready, but it was unfair to ask the judges to pass their order in the next two days.

Tamil Nadu chief minister O. Panneerselvam and his party AIADMK have requested the Centre to issue an Ordinance or an executive order to allow the sport. They said Jallikattu was integral to religious beliefs and sentiments of several village communities to mark the harvest festival.