Despite ban, Jallikattu held in Madurai village to protest ban

Residents of the village blamed both the state government and the Apex Court for not allowing the sport to take place. 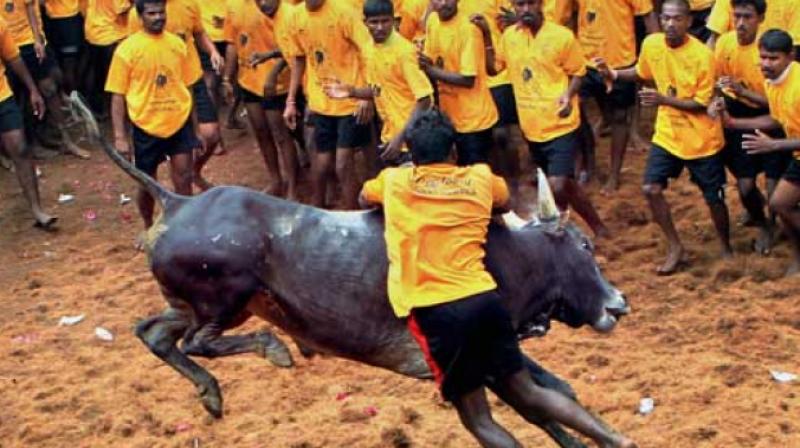 Madurai: A group of youth on Friday conducted Jallikattu in a village near here, in violation of the Supreme Court order banning the bull-taming sport, police said.

The sport was held in an open ground in Karisalkulam village for a few minutes, a police official said.

Around five bulls were let loose in the ground to protest against the court verdict, he said, adding no arrests have been made.

Tension prevailed in the village as the organisers of the game continued to make arrangements for "Manju Virattu" (another form of bull-taming sport) and heated exchanges were witnessed between the police and the locals, they said.

Talks are on to persuade the organisers to cancel the game, police said, adding they would be forced to arrest the organisers if they were adamant to hold the game.

Meanwhile, residents of the village blamed both the state government and the Apex Court for not allowing the sport to take place.

"There was no need for any court permission to follow one's culture," Muthupandi, one of the organisers said.

Meanwhile, a human chain protest was staged by youth outfits in Chennai, seeking to ensure the smooth conduct of Jallikattu during Pongal festivities.

The Apex Court had yesterday rejected the plea to pass a judgement on Jallikattu before Pongal.

As many as 28 functionaries of Naam Tamizhar Katchi were arrested for conducting Jallikattu in coastal Cuddalore town yesterday, police had said.