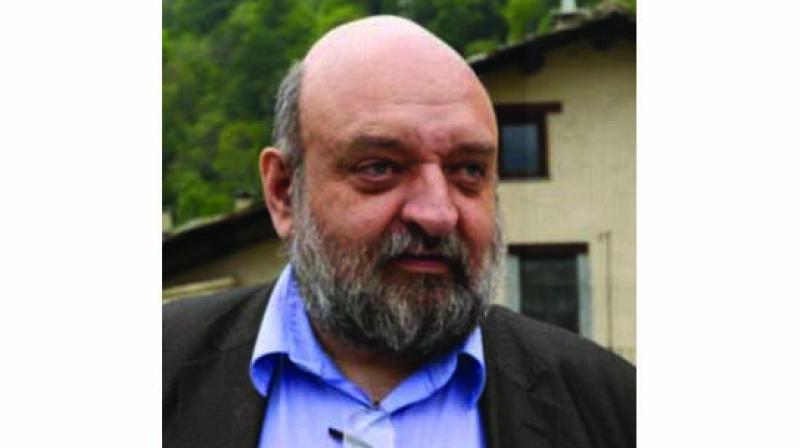 Dr Marcel Courthiade, linguist and professor of Romani studies at the INALCO University in Paris.

In ancient times, “crossing the ocean” or travelling to distant lands was tantamount to exile or death. However, archaeological evidence and travellers’ accounts combined with the work of historians have established that there was no dearth of Indian adventurers, artisans, craftsmen and traders who traversed the globe. Noted historian R.C. Majumdar stated “there is enough evidence to show that the people of Sindhu Valley carried on trade… with Sumer and the centres of culture in Western Asia, Egypt and Crete”. Hungarian scholar Aurel Stein (1862-1943) observed: “The vast extent of Indian cultural influences from Central Asia in the North to tropical Indonesia in the South and from the Borderlands of Persia to China and Japan has shown that ancient India was a radiating centre of civilisation.”

There is now enough anthropological and ethnological research evidence about early groups of migrants from India to foreign shores. And the status of the first ever Indian diaspora proudly belongs to the Rroms or Rromanis (also popularly known as gypsies, the world over). Originally from northern India, these people are believed to have migrated from Kannauj to Persian Khorasan roughly around 1014-1018, intermarrying and intermixing, before moving westwards into territories occupied by the Ottoman and Byzantine empires and finally into Europe at the beginning of the 14th century.

To commemorate the millennium year of the “Great Departure” from the motherland, the Antar Rashtriya Sahyog Parishad (ARSP) organised a four-day International Roma Conference in New Delhi, Lucknow and Kannauj. On the occasion,

Dr Shashibala, Indologist and joint secretary of ARSP, remarked: “Most of Indian history has been told from a colonial perspective or is based on research done by Europeans. The migration of the Rroms is a page of our history that we have forgotten and it’s time to resurrect it.”

Interestingly, the first Indian academician to have written about the Rroms was Dr Raghuveera who encountered them during his travels in Europe in 1928. He was intrigued by the cultural similarities, the presence of Sanskrit/Hindi words in Rromani vocabulary as well as social practices that bore a striking similarity with that of Indians. Chaman Lal, a Buddhist monk and researcher, studied the Rroms and authored Gipsies: Forgotten Children of India. Linguist Veer Rajendra Rishi, director of the Indian Institute of Rromani Studies in Chandigarh, also carried out extensive research into Rromani language and authored the Rromani-Punjabi-English dictionary. Marcel Courthiade, linguist and professor of Rromani Language and Culture at the Paris-based INALCO University says, “Rroms are people who do not know boundaries and they are an international community in the truest sense of the term.”

Despite their large presence in Europe — there are currently an estimated 15 million Rroms — they have consistently evaded the radars of academics and avoided public scrutiny. In a way, history has conspired to keep them a community of “outsiders” within the societies that they reside. When they were first spotted in Northern Europe in the early 1400s, they were believed to be spies for the Turks, because of their dark skin and hair. Social prejudices, combined with the distinct cultural practices of the Rroms further alienated them from the mainstream in the countries they resided. Over the centuries these culminated into a pathological suspicion of Rroms which has survived until the present day.

The first recorded anti-Rrom laws were issued in Germany in 1416 when they were accused of being spies and “bringing the plague into Europe”. In 1566, the German authorities had issued orders of “expulsion and extermination” of all gypsies. By 1876, the community was branded as a “criminal race” and the Rroms were officially termed as “lives unworthy of life”. The gypsy phobia exacerbated to its peak during the Third Reich, when along with Jews the Rroms were targeted for extermination. In January 1940, 250 Rrom children were used as “guinea pigs” for testing of gas in Hitler’s concentration camps, ultimately leading to the genocide of 500,000 Rroms — a fact that rarely finds mention in the brutal history of the Holocaust.

During the 1990s’ ethnic cleansing in the Balkans, the Rroms were again a soft target. Ian Hancock, professor of Romani Studies, University of Texas, says: “Non-ethnic people were being kicked out. If you were a Serbian, you had no place in Bosnia, and vice-versa. But if you were a Rrom you had no place to go.”

It’s not surprising then that having faced a thousand years of prejudice and persecution, the Rroms continue to be secretive about their identity as a community. Known to be artisans, craftsmen and entertainers, many of them have scaled great heights of success — including legendary actor-filmmaker Charlie Chaplin, Elvis Presley, Django Reinhardt, Michael Caine, among others — but as a group they continue to face tremendous odds. Recalling her own experience, Dr Shashibala says: “Even today, the average Rrom is treated with suspicion. When I visited England, I wanted to visit the Rrom colonies for research purposes but I was discouraged from doing so.”

Staying away from the mainstream has, ironically, also helped them to preserve their unique identity and culture. It’s remarkable that a thousand years since their migration from Kannauj, their language resonates with words that their forefathers spoke. They continue to practise the rituals of their ancestors, and the discrimination they faced has only helped to preserve their cultural heritage.

It’s only fitting that there should be an acknowledgement of this strong bond from the Indian government. Prof Courthiade says: “Prime Minister Indira Gandhi had welcomed the Rroms with warmth and love. Several delegations of Rroms have since visited India.” He is hopeful that with the support of the present government, the Rroms will be acknowledged not merely as “forgotten children” but as cultural ambassadors of India.