All eyes now were on Rahul Gandhi's choice of CMs of three states, which he will decide after MLAs finish their meet. 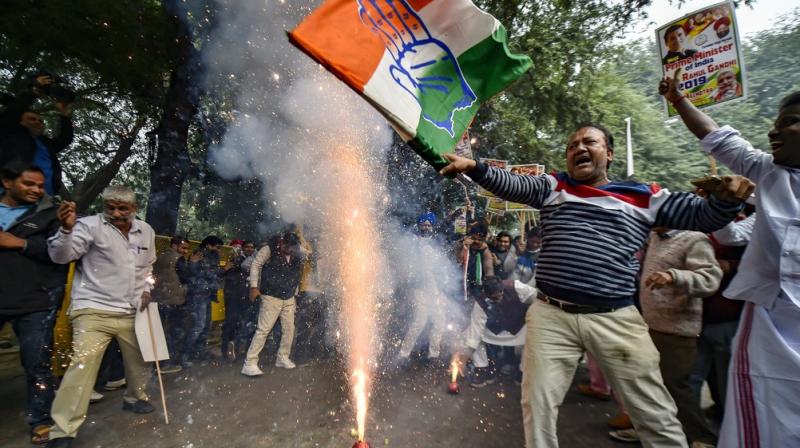 Jaipur/Bhopal/Raipur: The Congress was poised on Wednesday to form governments in Rajasthan, Madhya Pradesh and Chattisgarh, signalling a newfound energy in the party ranks and energising opposition efforts to stop the BJP juggernaut before general elections next year.

Belying predictions of exit polls, the Congress won convincingly in Chattisgarh, less so in Rajasthan, and scraped through with a wafer-thin lead in Madhya Pradesh, final results showed after the vote count on Tuesday.

All eyes now were on party president Rahul Gandhi's choice of chief ministers of the three states, which he will decide after the victorious MLAs finish their meetings in the three states.

Former Congress president Sonia Gandhi described the party's good showing in the Hindi heartland states as a victory over the BJP's "negative politics".

It was a "Congress victory over the BJP's negative politics," she said.

In a sign of burgeoning opposition unity, Bahujan Samajwadi Party (BSP) leader Mayawati extended support to the Congress in Rajasthan and Madhya Pradesh, while the Samajawadi Party indicated that the party could join a grand alliance of opposition parties to take on the BJP in the 2019 polls.

"The results could have been better and the SP and Congress could have won more seats had the Congress leadership coordinated (with us) in a better manner," Yadav said.

Asked if there was possibility of the SP joining a grand alliance against the BJP, he said, "I think so."

In Rajasthan, the contenders for the chief minister's post are Pradesh Congress Committee president Sachin Pilot and former chief minister Ashok Gehlot, both of whom won huge victories in their constituencies.

"We have full majority and will stake claim to form government in the evening. We will take along all non-BJP parties and elected members who are against BJP and are willing to support us," Pilot told reporters at the PCC before the Congress Legislative Party meeting.

He said the party's newly elected MLAs will debate the choice of the chief minister, and the party president will take a decision after that.

The Congress emerged as the single-largest party in Rajasthan, winning 99 seats. Its ally Rashtriya Lok Dal (RLD) won one seat for a total of 100 seats -- the required number to form government. The BJP got 73 seats, and the Bahujan Samaj Party won 6 seats. The CPI(M) got two seats, Independents won 13 and other parties got 6, according to the state Election Commission. "We fought the elections to keep the BJP out of power ... We do not agree with the philosophy of the Congress. But to keep the BJP out of power, we will extend it our support," Mayawati said in a statement.

The Congress victory in Chhattisgarh ended the 15-year rule of the Raman Singh-led Bharatiya Janata Party government. It won 68 seats in the 90-member Assembly, far more than the 46 required to form the government, while the BJP got only 15 seats.

The chief minister is likely to be announced after the meeting. The Congress got 43 per cent of the total votes polled in the state, while the BJP got 33 per cent.

After a see-saw battle during vote count on Tuesday, Congress emerged as the single largest party in Madhya Pradesh with 114 seats, two short of a simple majority.

The BJP, which had ruled the state for 15 years, got 109 seats. Three-time Chief Minister Shivraj Singh Chouhan tendered his resignation on Wednesday to Governor Anandiben Patel, who then met a Congress delegation at noon after party leaders staked claim on the government. After meeting Patel, senior Congress leaders Kamal Nath and Jyotiraditya Scindia came out of the Raj Bhavan in Bhopal and flashed victory signs.

In Mumbai, NCP chief Sharad Pawar said the Assembly election results mark the "beginning of a change" and a "rejection" of the BJP-led government's policies. Pawar, who turned 78 on Wednesday, said his party would support the Congress and also suggested the SP and the BSP throw their weight behind Congress.

Referring to the constant criticism of Rahul Gandhi by the BJP, the former Union minister said people did not like the Congress president being "ridiculed".

"People have expressed disappointment against the Modi government... the Assembly poll results mark the beginning of a change... people rejected the anti-farmers, anti-traders policies of Modi," Pawar told reporters here.

The Shiv Sena, an ally of the BJP at the Centre and in Maharashtra, said people have brought "those flying in the air back to the ground".

In Telangana, TRS president K Chandrasekhar Rao was elected leader of the legislature party, paving the way for his return as chief minister for the second straight term.

The TRS won 88 seats in the 119-member House, and Rao was re-elected from Gajwel in Siddipet district.