Vardha will turn into a 'cyclonic storm' in next 3-4 hours, the India Meteorological Department said. 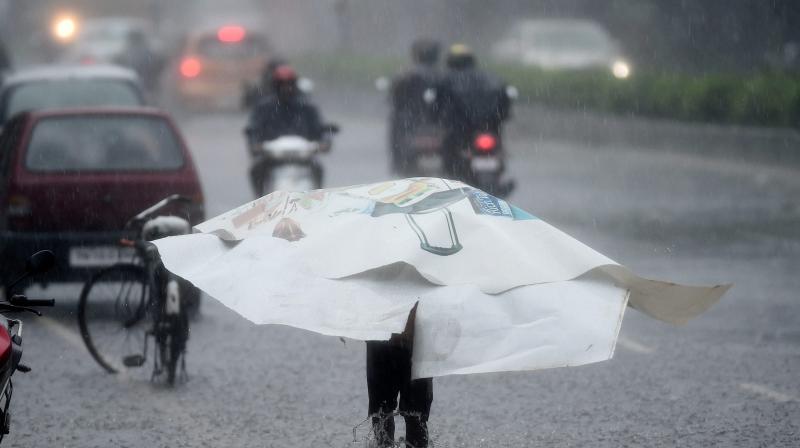 A person wades through road filled with water during heavy rainfall as cyclone Vardah made landfall near Chennai coast on Monday. (Photo: PTI)

Chennai: Heavy rains accompanied by high-velocity winds pounded the city and coastal districts of north Tamil Nadu as severe cyclonic storm "Vardah" commenced its landfall through the coast, killing four people and forcing the evacuation of thousands of people from low-lying areas.

While two persons died in Chennai, one was killed in Kancheepuram and one in Nagapattinam, National Disaster Management Authority said.

The cyclone has shown signs of weakening and will turn into a 'cyclonic storm' in next 3-4 hours, the India Meteorological Department (IMD) said.

Meanwhile, Union Home Minister Rajnath Singh assured the Tamil Nadu government of extending all help to the state in the wake of cyclone 'Vardah'.

"Singh called up Chief Minister O Panneerselvam and enquired about the situation in the aftermath of cyclone Vardah crossing the districts of Chennai, Kancheepuram and Thiruvallur," a government statement said.

"The Union Home Minister assured the Chief Minister that the Centre would extend all help required by the State Government in this regard," it added.

"The cyclone is still crossing, only the eye portion has crossed... Presently it is calm. The entire system is expected to fully cross coast between 6 pm and 7 pm," a top IMD official told PTI in Chennai.

Showers and heavy winds will resume once the eastern portion of the system begins to blow over, the official said.

However, the respite is Vardah is "weakening" and is expected to be turn into a "cyclonic storm" in next three hours, said M Mohapatra, IMD Additional Director General (Services).

Tamil Nadu Chief Minister O Panneerselvam urged people in Chennai, Tiruvallur and Kancheepuram districts – where ‘Vardah’ brought life to a virtual halt - not to venture out of their homes till an official announcement was made.

Two persons had died and 24 huts were damaged, most of them in Tiruvallur district, according to an official statement.

About 8,000 people from low-lying areas in north Chennai, Pazhaverkadu in Tiruvallur district and villages off Mamallapuram, in Kanchipuram district were safely evacuated to 95 relief shelters, officials said.

The IMD's latest inputs indicated that heavy wind and rains would continue till about 7 PM, Panneerselvam said, adding all arrangements are in place to handle the situation.

Coastal regions of northern Tamil Nadu - Chennai, Tiruvallur and Kanchipuram - continue to be on high alert even as people in low-lying areas were accommodated in relief centres.

Fishermen from Adyar and Tiruvanmiyur areas were accommodated in local schools and food and blankets were being distributed to them. State Ministers are visiting relief

centres and inspecting distribution of food to the people, an official release said.

Under the impact of "Vardah", hundreds of trees were uprooted, land and air transport was disrupted and normal life was thrown out of gear in many areas.
Eight fishermen belonging to Tamil Nadu were rescued from the sea near the Sriharikota High Altitude Range while search was on for ten more persons feared trapped at sea.

"The police and CISF personnel are on the job and all the ten fishermen are safe. But they are somehow reluctant to come to the shore. We will soon bring them out," Nellore Superintendent of Police Vishal Gunni told PTI over phone.

The South Central Railway has cancelled some passenger trains between Sullurpeta and Chennai in view of the cyclone.

Meanwhile, all operations at Chennai airport have been suspended till 10 pm.
The earlier forecast made by the IMD was that it would weaken into a cyclonic storm, thereby reducing its intensity considerably.

At 9:30 am, the cyclone was lay centered around 105 kms east-northeast of Chennai. By the time it makes a landfall, its wind speed is expected to be 100-110 kmph with winds gusting up to 120 kmph.

Rainfall at most places with isolated heavy to very heavy falls over south coastal Andhra Pradesh, north coastal Tamil Nadu and Puducherry is very likely during the next 36 hours.