Andhra Pradesh Chief Minister N. Chandrababu Naidu has advised the fishermen not to venture into the sea during the next 36 hours. 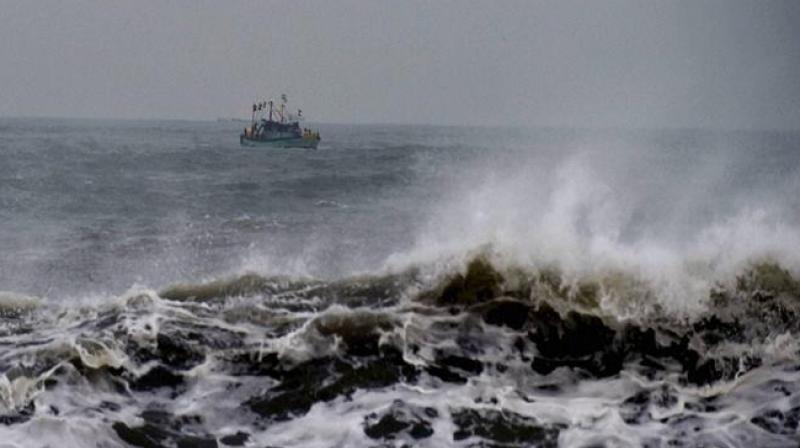 Chennai/Amaravati: Cyclone Vardah made landfall in Chennai shortly before 3 pm on Monday. The cyclonic storm with a wind speed of 100-110 km/hour would take more than two hours to complete, said M Mahapatra, ADG, the Indian Meteorological Department (IMD).

Two persons were killed as heavy rains accompanied by high velocity winds pounded the city and coastal districts of north Tamil Nadu before cyclone Vardah made landfall in the afternoon.

The outer periphery of cyclone Vardah had touched the Chennai coast in the afternoon, leading to strong winds and traffic jams in the city. The first arm hit the Tamil Nadu coast with wind speed of 110-120 kmph, the IMD had said.

The Tamil Nadu government has urged people to not venture out of their houses till the landfall is complete and operations at Chennai airport has been suspended till 6 pm.

A high alert has also issued in Andhra Pradesh, where over 9,400 people in seven mandals along the Bay of Bengal coast in were evacuated to relief camps in the morning amid heavy rains.

Andhra Pradesh Chief Minister N Chandrababu Naidu, who is monitoring the situation through teleconference with top officials, said that fishermen have been advised not to venture into sea during the next 36 hours.

Ten diving teams have embarked on ships Shivalik and Kadmat, the Navy said.

Furthermore, 22 diving teams have been kept on standby at for immediate deployment.

The rain inundated low lying areas, while high velocity winds uprooted hundreds of trees as the severe cyclonic storm Vardah reached about 50 kms northeast of the state capital at noon and was likely to make landfall in the next couple of hours.

According to the IMD bulletin at noon, by the time Vardah hits the coast between 2 pm and 5 pm, winds with speed of 100-110 kmph to 120 kmph are likely to sweep the region.

Squally winds hit Chennai this morning as the very severe cyclonic storm approached Tamil Nadu. Power supply was suspended in many parts of these regions as a precautionary measure.

The rains intensified as the cyclone neared leading to water logging in many areas.

The Tamil Nadu government had declared holiday for educational institutions in Chennai, Kancheepuram and Tiruvallur, besides coastal taluks of Villupuram.

Rail and flight services here have been affected, officials said.

Around 25 incoming flights, including those from international destinations, were diverted to the nearby and airports due to strong winds and poor visibility, airport officials said.

Nearly 25 outbound flights were delayed, officials said, adding that there was no inundation of the runway.

An emergency management team was on standby to meet any eventuality, they said.

The Southern Railways, meanwhile, announced suspension of services on the and Velacherry MRTS route.

Similarly, suburban rail services on the MMC-Gummidipoondi line were also suspended until further notice. Some passenger trains coming to Chennai and leaving the city were also diverted.

The system was likely to move nearly westwards and weaken gradually while moving towards north Tamil Nadu and adjoining south Andhra Pradesh coasts.

Nineteen teams of National Disaster Response Force (NDRF) have been deployed in various coastal regions of Tamil Nadu and Andhra Pradesh which are on high alert due to the approaching cyclonic storm.

The armed forces have been asked to be on standby with the army, navy and air force prepared to be deployed anytime as and when required.

People in low-lying areas have been asked to move to safer zones.

Police personnel were deployed on the entire two-and-a-half kilometre stretch of beach road and barricades were also put on all roads close to the sea shore. All schools and colleges are closed on Monday.