Assuming that it will take five years to build the temple, a yearly instalment of Rs 2 crore would be given to that temple trust. 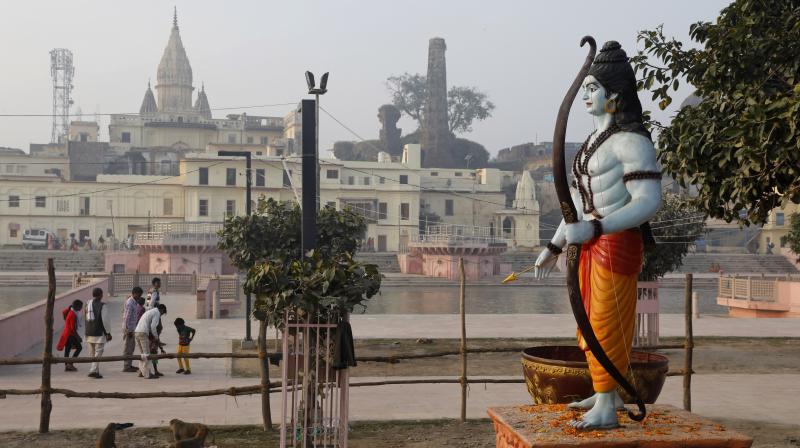 Enthused by the Supreme Court verdict, the secretary of the trust, Kishore Kunal, had earlier announced here that the Patna-based religious body will contribute Rs 10 crore for the construction of a temple for Ram Lalla. (Photo: Representational)

Ayodhya: Devotees visiting the Ram temple site from outside Ayodhya will soon be offered a community meal and also get to taste delicious sweets akin to Patna's famous 'Naivaidyam' laddoos, thanks to an initiative of the Bihar-based Mahavir Mandir Trust.

Enthused by the Supreme Court verdict, the secretary of the trust, Kishore Kunal, had earlier announced here that the Patna-based religious body will contribute Rs 10 crore for the construction of a temple for Ram Lalla.

Now the trust is waiting for the situation to get normal in Ayodhya, after which it plans to start the construction work of a community kitchen where devotees visiting the town will be offered daily meals and the 'Raghupati' laddoos.

Settling a fractious issue that goes back more than a century, the Supreme Court in a historic verdict on Saturday backed the construction of a Ram temple by a trust at the disputed site in Ayodhya, and ruled that an alternative five-acre plot must be found for a mosque in the Hindu holy town.

"The Mahavir Mandir Trust had pledged this money five years ago, and we were waiting for the judgement. This amount of Rs 10 crore would be sent in instalments to the trust that the apex court has ordered to constitute for construction of the temple at the Ramjanmabhoomi. The moment the trust is formed, we will send the first instalment to its account," he said.

Assuming that it will take five years to build the temple, a yearly instalment of Rs 2 crore would be given to that temple trust, he said.

"However, it so happens that the temple gets built in a shorter time period, then we will hand over the full funds in that period only," the Mahavir Mandir Trust's secretary said.

Kunal, a former IPS officer, was appointed an officer on special duty (Ayodhya) in the early 1990s to then minister of state for home affairs for negotiations between the Hindu and Muslim leaders on the Ayodhya issue.

He has also authored two books on Ayodhya 'Ayodhya Revisited' and 'Ayodhya: Beyond Adduced Evidence'.

"We are very happy about the verdict of the Supreme Court in the Ayodhya case. Hanuman ji is a 'sewak' of Shri Ram, and now Patna's Hanuman mandir (Mahavir Mandir) will serve people coming to visit the birthplace of Lord Ram," Kunal said.

The Mahavir Mandir Trust is just waiting for the situation to get normal in the city, as right now it is a under heavy security cover. Once things begin to become normal, the work on the community kitchen will begin, he added.

"In January earlier this year, we started a community kitchen in Sitamarhi, the birthplace of Sita ji, and we call it 'Sita Rasoi'. In Ayodhya, near the Ramjanmabhoomi site, we will start a similar kitchen, and it will be called 'Ram Rasoi'," Kunal told PTI.

"And, this 'Ram Rasoi' will be for people from outside of Ayodhya visiting the Ramjanmabhoomi site. We will offer daily meal to them and they will also get to taste sweets akin to Patna Mahavir Mandir's famous prasad 'Naivaidyam' laddoos. We will call these 'Raghupati' laddoos," he said.

'Naivaidyam' laddoos are famous in Patna for their superior quality and unmatchable taste, the recipe for which has been kept secret by the trust. 'Hanuman mandir or Mahavir Mandir is located opposite Patna railway station and is one of the most-visited temples in Bihar.

It is centuries-old though its structure was renovated on a much larger scale in mid-80s by Kunal, and is now a veritable city landmark and a tourist attraction.

"Just like Patna has 'Naivaidyam' and Tirupati has 'Tirupati' brands, Ayodhya will have 'Raghupati' laddoos. We want to spread the sweetness of Patna in Ayodhya. And, Hanuman and Ram will always be connected," Kunal added.

Kunal is also the secretary of the trust that oversees a temple complex built by erstwhile Ammawan Raj of Bihar. The complex, locally called Amawan Mandir, neighbours the Ramjanmabhoomi site.

"I was in the temple complex on November 8 to perform a religious ceremony there and on that very night, the date for the verdict was announced. It felt very auspiciousThis temple complex built in 1939 house many deities. But, it is perhaps one of its kind temple in the country, dedicated to Lord Ram in young stage of his life ('Balak Swarup Ram')," he said.

Now, with a new temple set to be built at Ramjanmabhoomi, glory of Ammawan temple will also grow, Kunal said.

The top court in its verdict had asked the government to allot the five-acre plot in a "prominent" location in Ayodhya for constructing a new mosque.

The disputed 2.77-acre plot will for now remain with a Central government receiver, who will hand it over to a government-created trust that must be created within three months. The trust will be tasked with the construction of the temple.