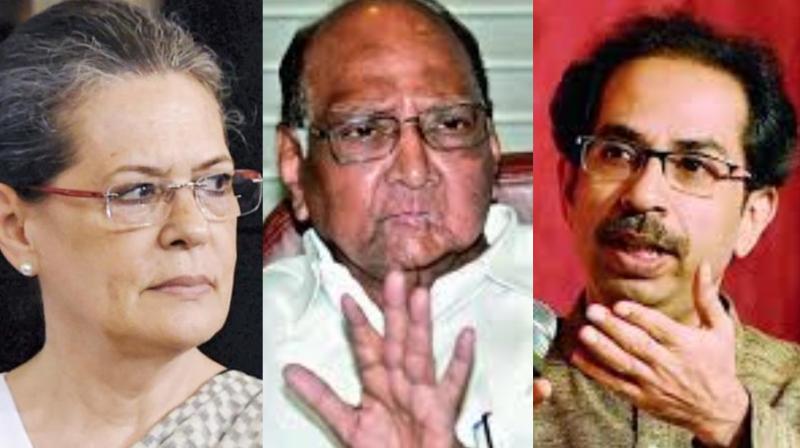 As the Maharashtra crisis continue after the Shiv Sena failed to stake claim, Nationalist Congress Party (NCP) chief Sharad Pawar on Tuesday said that he would speak to Congress over the delay in government formation in Maharashtra. (Photo: File)

Mumbai: As the Maharashtra crisis continue after the Shiv Sena failed to stake claim, Nationalist Congress Party (NCP) chief Sharad Pawar on Tuesday said that he would speak to Congress over the delay in government formation in Maharashtra.

While, Pawar’s nephew Tuesday held its ally Congress responsible for a delay in taking a decision regarding the alliance's support to Shiv Sena for the government formation in the state and said that a decision for the 'stability' in the state would be taken collectively.

"Congress and NCP fought elections together. That's why we should make the decision together. We waited for Congress’ letter yesterday. But we did not receive the letter by the evening. It was not right for us to give the letter. Whatever be the decision, there should be stability," NCP leader Ajit Pawar told reporters.

According to sources, if the Maharashtra Governor imposes President Rule in the state, Shiv Sena could approach Supreme Court.

The NCP chief also met Shiv Sena leader Sanjay Raut at Lilawati hospital on Tuesday. Raut was admitted to the hospital on Monday after he complained of chest pain.

Talking about forming government in Maharashtra, Senior Congress leader Mallikarjun Kharge said, “NCP and Congress had pre-poll alliance, and final decision would be a collective decision. Our talks with NCP are on, and we would only move forward once discussions with them are done. Congress president Sonia Gandhi ji and Sharad Pawar ji too held discussion.”

Maharashtra Governor Bhagat Singh Koshyari on Monday evening asked NCP chief Sharad Pawar to indicate willingness and ability of his party, which finished third in the Assembly polls, to form the government in the state.

The development came after Shiv Sena, which was keen to have its chief minister in the state, did not get additional time from the Governor to submit letters of support from the NCP and the Congress.

Both the NCP and the Congress held meetings on Monday over the developments as the Shiv Sena expressed its desire to form a non-BJP government.

The NCP, however, made it clear that it would not take a decision without its ally Congress spelling out its position.

On Monday, the Congress Working Committee discussed the developments in Maharashtra and decided to have a meeting with its leaders from Maharashtra before taking a decision. At the end of deliberations, the party issued a statement which talked of further consultations with the NCP and made no mention of the Shiv Sena.

The BJP, which emerged as the single-largest party in Maharashtra Assembly polls with 105 seats, declined to form the government following differences with the Shiv Sena on 50:50 seat sharing formula. The NCP has 54 MLAs while its alliance partner Congress has 44.

If the NCP gets support of Shiv Sena, which has 56 legislators, and Congress, it would easily cross the majority mark of 145 in the 288-member Assembly.