Over 600 cops deployed; HRD minister stuck inside auditorium for 6 hours. 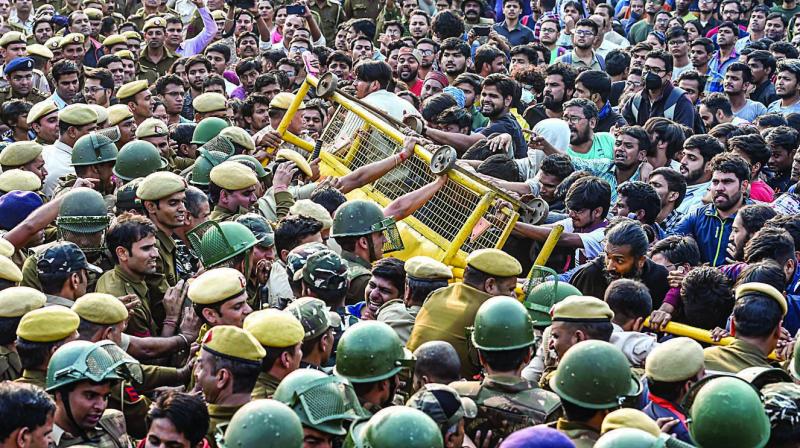 Cops stop Jawaharlal Nehru University students during a protest over the hostel-fee hike and the administrations alleged anti-students policy in New Delhi on Monday. (Photo: PTI)

New Delhi: Shouting slogans and raising banners, thousands of Jawaharlal Nehru University (JNU) students clashed with police on Monday as their protest over steep fee hike escalated, leaving HRD minister Ramesh Pokhriyal ‘Nishank’ stranded for over six hours at the venue of the varsity’s convocation. The students of the varsity, which has seen several such agitations in the recent years, were protesting outside the All India Council of Technical Education (AICTE) premises, the venue for the varsity’s third convocation, which was addressed by Vice President M. Venkaiah Naidu.

The protests started in the morning and escalated as the day progressed with crowds of angry students, with banners saying “Roll back fee hike”, trying to push through a wall of anti-riot police personnel to reach the venue.

Several barricades put up by the police were broken by the students, who started their march towards the AICTE premises, about 3 km away from the university’s campus in south Delhi, around 10.30 am. Water cannons were used to disperse the protestors and police said some of the students were detained. Top brass of the Delhi Police were at the site to handle the situation. The police detained several students, who were released after few hours. The students shouted slogans like “Police ko aage karta hai, JNU VC darta hai” as they demanded that vice-chancellor M. Jagadesh Kumar meet them and listen to their demands.

During the scuffle with police personnel, the students raised slogans like “Police-walo ki ek bimari, Tis Hazari, Tis Hazari”, referring to their clash with lawyers at the city’s Tis Hazari court a few days back. The students are demanding withdrawal of the draft hostel manual, in which service charges of `1,700 were introduced and the one-time mess security fee, which is refundable, has been hiked from `5,500 to `12,000. The rent for a single-seater room has been increased from `20 per month to `600 per month, while rent for a double-seater room has been increased to `300 per month from `10 per month.

The draft hostel manual also has provisions for dress code and curfew timings, the students’ union alleged, even as the administration denied these two claims. The protests started in the morning and escalated as the day progressed with angry crowds of students pushing against police personnel in anti-riot gears. Over 600 security personnel were deployed to handle the protest. According to a varsity official, JNUSU president Aishe Ghosh and vice-president Saket Moon along with other students met the Union HRD minister, who assured them that their demands would be looked into. JNU Students' Union (JNUSU) said that the hike and additional fees will directly hit 40 per cent of the economically marginalised students.